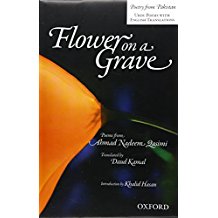 Ahmad Nadeem Qasimi (1916–2006) was a major Pakistani poet (Jalal-o Jamal, Shola-i-Gul, Kisht-e Wafa, to name just a few), short story writer (Chaupal, Sannata, Kapaas Ka Phool and many more), and editor of many journals (Savera, Nuqoosh, Funoon, Adab-e Lateef). As one associated with the Progressive Writers Movement, who later distanced himself from it, Qasimi is acknowledged as a writer who portrayal liberal human values. Literature, for him, was as much of a political agenda as it was a mode of expressing the basic aspirations that one lives and abides by. His translator, Daud Kamal (1935–1987) an academic, poet (Compass of Love and Other Poems, 1973; Recognitions, 1979; A Remote Beginning, 1985; Rivermist 1992; Before the Carnations Wither 1995; A Selection of Verse, 1997) was also a translator of Mirza Ghalib (Reverberations, 1970), Faiz Ahmad Faiz (Selected Poems of Faiz Ahmad Faiz, 1984), Munir Niazi, and Ahmad Faraz (Four Contemporary Poets: Translations from Urdu, 1992). Both Qasimi and Kamal are the two formidable literary men of their times and figure prominently in the accounts of Pakistani literature.

Flower on a Grave is a selection of twenty-four poems by Qasimi written between 1963 and 1978 with the original Urdu text alongside the English translations. Kamal’s translations were done between 1982 and 1984. As one who has chosen some of the finest Urdu poets to render in the English language, his translations are clearly reflective of the choices he makes as a poet-translator which he essentially is. This can be testified from poem to poem. He reads the source text on his own, casts them in his own mould which is, quite often, different from the mould of the original. He prefers writing the poem than translating them which implies that instead of being literal and too close to the source text, he re-configures the poems for his readers as he figures them out for himself. His translations can better be read as independent poems that acquire a form of their own. Translations of this nature raise questions, quite naturally, about structure and meaning as also about image and symbol. Problems of this kind have often come under discussion with respect to one poet translating another poet. And there are quite a few examples where poet-translators have passed well under the excuse of translation being an act of creative negotiation. This, however, becomes a problem especially when the negotiation becomes much too liberal and imparts the original text an altogether different life and environment. Kamal’s translations raise these issues many a time even though his translations succeed as independent poems on their own.

The title of the book is derived from a poem called ‘Qabr Pe Phool’, rightly and exactly translated as ‘Flower on a Grave’. Enter the original ‘Qabr Pe Phool’ in Urdu and experience the pleasure of reading a fine, sensitive poem—a poem that tells a lot in its seven short lines. Then enter the English translation and you discover a different poem. This difference lies not in how a translator negotiates (and slips in negotiating) the proverbial hazards involved in the act of translation but in the very reading of this poem in the Urdu original. There is so much of interpretation in Kamal’s translation, and at least one major misreading, which alters the obvious and basic intent of the poem. The cumulative impact that the poem so brilliantly builds in Urdu is impaired in its English translation. I would like to quote this translation as an example of how Kamal approaches a text. Broadly speaking, Kamal’s translations of Qasimi suffer, from and this problem succeed would when he only disengages from the trap and temptation of too individualistic an interpretation and free rendition.