Ayodhya and the Role of Archaeology 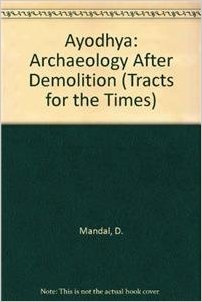 Admittedly, archaeology cannot answer questions relating to faith, or questions such as whether Rama was an historical figure, or problems about locating his birthplace. However, archaeology can answer with a considerable degree of certainty, many questions about various past activities of people, for which material evidence is available. It is for this reason that archaeological research continues and is of importance. It is believed that sufficient archaeological material is available regarding the temple-mosque issue, pre-empting the need for further excavations at Ayodhya. It appears somewhat curious that while the mosque was being demolished, some individuals were digging near Kuber Tila, only about 220 metres from the mob, out of archaeological interest. The mosque was, of course, well known to all, but it is surprising that the spot where the objects of a ‘demolished temple’ had been dumped centuries ago was unerringly identified during mob frenzy and when much of Ayodhya was tense.In the early ‘90s a couple of booklets, brought out by the Historian’s Forum, claimed on the basis of ‘new archaeological discoveries’ made at Ayodhya that now there was ‘proof’ of a eleventh century temple, which had been destroyed in the sixteenth century and over its debris was built the Babri Masjid.