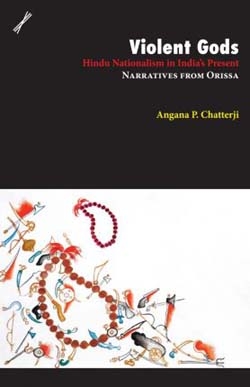 In this impassioned study based on what the inside cover of the volume describes as ‘situated reflections, story telling and ethnographic accounts,’ Angana P. Chatterji, a social and cultural anthropologist at the California Institute of Integral Studies, in the United States, attempts to understand organized Hindu majoritarianism in the eastern province of Orissa. The present work was conducted between June 2002 and June 2008, over sixteen trips. (p.27).

For Chatterji, the claim of Orissa as a ‘peaceful’ state confirms a political lie. The façade of peace, she argues, deliberately conceals social fault lines and violent tectonic shifts that erupt in periodic riots in places like Rourkela, Cuttack, Bhadrak, and most recently Kandhamal.

Violence, Chatterjee says, is the ubiquitous fact of life of modern Orissa. This violence, maniacal and primordial in its fury and sweep, in varying ‘physical, psychological, social cultural, economic, representational and political forms, has been crucial to maintaining majoritarian dominance.’ (p.36).There is consequently a growing divide within the society in terms of ‘Hindu, non-Hindu’, ‘authentic-inauthentic’, ‘patriotic, anti -national’ categories.

Indeed, Orissa, according to Chatterji, has become a poisonous Hindutva laboratory. There is a deadly mix of feudalism and anti – minority pogroms here. The actual fear of the ruling class/caste seems to be the destabilization of upper caste mythologies.