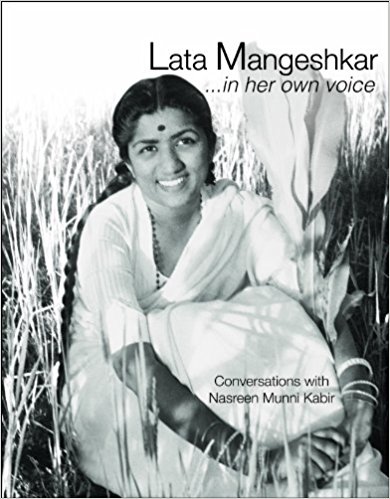 Sometimes idols always fail to impress on first sight leaving dedicated fans vaguely dissatisfied. My first glimpse of the legendary Lata Mangeskar was in pre-Emergency 1970s when Doordarshan featured excerpts from the ‘Lata Mangeshkar Nite’ held at Asoka Hotel, Delhi. All I remember is an unsmiling woman in a white sari rendering the familiar film numbers. Lata had no stage presence, refused to make eye contact with the audience and throughout the concert looked severely at a notebook in front of her (she justifies this claiming that words are as important as the music). The only relief was a tall accordion player in the background whose swaying movements inadvertently supplied some tension and drama to the stage. Clearly Lata’s fire was reserved for recorded music. In the 1970s she re-invented herself becoming the voice of a new generation of heroines, winning kudos from her dedicated fans reaching new heights in her rendition of songs.

In the 1980s she once again stunned her fans with the lyrical ‘Aye dil-e naadaan’ from Razia Sultan. Only age has finally managed to gently displace her as the reigning queen of film music.

Nasreen Munni Kabir’s big interview which coincides with the celebrations around Lata’s 80th birthday manages to reach behind the public persona and provides many insights and information about her life. This sober interview does not probe or court controversies and is immensely respectful. Lata has however been the target of some provocative writing and rumour mills about her have always worked overtime. Raju Bharatan the veteran cricket and music journalist produced a wonderfully wicked if enthusiastic account a decade ago. The Lata lobby promptly replied by publishing a staid and suitably worshipful biography by Harish Bhimani. But Bharatan’s book was superior – his knowledge of her music and discography was difficult to match and he peppered his text with memorable one-liners (e.g. ‘If Noorjehan had métier then Lata was a meteor’ etc.).