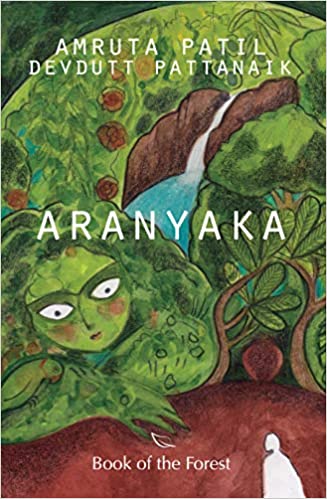 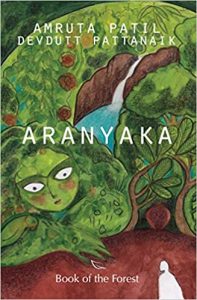 In the Rig Veda the rishi-poets reserved the sun and moon, the sacred fire, thunder and lightning for the macho male gods and only gave the forests to a goddess—Aranyani.  In a beautiful hymn she is described as an elusive and very beautiful woman whose presence can only be felt through the sound of her anklets. Amruta Patil’s forest goddess Katyayani is a very different creature. This down to earth Aranyani, living in Vedic times, has wild curly hair; large Durga-like eyes and a voluptuous body. She can be mysterious and enigmatic but is also generous and open. Patil’s  Katyayani is Mother Earth and so she is ignored and taken for granted by the superior, male intellectuals of the forests—the sage-rishis.

The books called the Aranyakas are part of the later Vedas like the Brahmanas and the Upanishads and are said to be the work of scholars who lived in the forest in ashrams, therefore the name Aranyaka—‘of the forest’. Katyayani is also of the forest, in its role as a provider of food and shelter and she knows the forest in a way the rishis, expounding impossible to understand theories like advaita and shunya, never learn to do. The rishis don’t really understand nature, she does.

Katyayani is always hungry and is banished from her tribe because she ate the food offered to the gods and she was unrepentant of her appetites. She learns to survive in the forest that reveals its wealth slowly. Patil does not romanticize the forest, ‘… the way of the aranya: you eat. You get eaten. You fight, often unto death, to preserve turf and to get the best mate. Human laws are meaningless here. Aranya doesn’t mind you alive, it doesn’t mind you dead. In fact, it doesn’t care one way or the other. Here I wasn’t Katyayani the Large, but predator, prey, ally, rival, mate…’ and she draws it as a dark, threatening place.