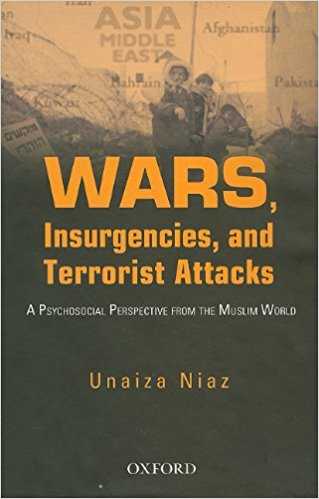 Terrorism as a subject has evoked a great deal of academic interest from various disciplines. Professor Unaiza, a consultant psychiatrist and psychotherapist, has put together this work ‘to sensitize and create awareness about the relentless sufferings of innocent civilians globally following 9/11.’ The book, as the editor points out in the preface, is a documentation of facts about the ‘violences in the Muslim world’ with contributions from various Arab and Muslim countries. An understanding of the Islamic states is imperative, as Professor Okasha points out in the book, ‘the more we are unable to understand the dynamics, frustrations and political systems in the Muslim world, the greater the chances for endless encounters. Unless we promote the fight against poverty, illiteracy, illness, unemployment, and ameliorating frustration due to lack of freedom and democracy and the despotic regimes in most Muslim countries, our struggle with terrorism will be futile.’

The chapter on Islam and Anti Terrorism places terrorism in the context of Muslim countries, differentiates terror-resorting Muslims from the ‘religion of mercy, compassion and tolerance’, conceptualizes terrorism as a means to induce fear to bring about political change and urges mental health professionals to intervene at both the levels—of the victim and the victimizer.