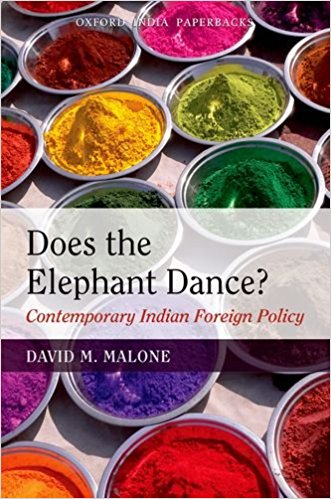 The elephant has become an obvious, even if cliched, symbol of modern India but the imagery of the dancing elephant has been used in other contexts as well. Thus Louis V. Gerstner in his Who Says Elephants Can’t Dance? recounts the dramatic turnround in the fortunes of IBM that was once considered too big and not nimble enough to survive. If that work was the confident—bordering on brash—assertion of a management icon, David Malone’s work offers the tentative conclusions of a sensitive social scientist. The title of his work is revealing: rather than cast a doubt on the elephant’s ability to dance—which would have been the case if the title had been ‘Can the Elephant Dance?’—he focuses on the current state of Indian foreign policy and how effective it has been. David Malone is an accomplished scholar-diplomat and the author of several books on the United Nations system and multilateral diplomacy. He was Canada’s High Commissioner in New Delhi between 2006 and 2008 and is currently the President of the International Development Research Centre, Canada.

He brings to bear in his latest book his insightful analysis enriched by his interactions with a wide range of Indian scholars, diplomats, foreign policy and security analysts during his time in New Delhi. He found New Delhi a place of intense debates, with the life of the mind engaging as in Washington, London and Paris. He also notes that there is a great deal of similarity in the debates within the United States and India, with both being characterized by optimism, openness and self-absorption and with occasional hubris on display.