Hues of Denial and Mimesis In Constructing Resistance 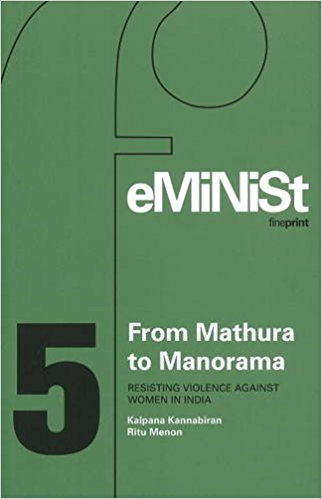 From Mathura to Manorama invites us to think critically of how feminist projects opposed to violence against women are con- structed. This exciting book shows us how feminist politics against violence has been varied in its forms, strategies and premises. This important book must be read and taught especially since the authors demand reflexivity by re-visiting the inception of the violence against women campaigns. For instance, they mark the elision of the queer lives from feminist analyses of violence against women. They emphasize the ‘complexity of interlocking fields of violence’, i.e., how class, caste, communal, regional, sexual identities impact analyses of violence against women. Like other accounts, the centrality of the campaigns against rape to the women’s movements in India is remarked upon in this book. In revisiting the painful narratives of custodial rape narrated through Rameeza Bi and Mathura, the authors point out that the critique of custodial rape operated within the ambit of state violence in the civil liberties paradigm in the 1980s. However, custodial rape spans both the domestic and public context by including child sexual abuse as well as contexts of custodial rape during the dark times of mass scale conflict.

The documentation of state violence in Gujarat, Manipur and Kashmir highlights therefore how custodial violence against women is normalized during communal violence and armed conflict.

We are told that even though issues of ‘identity, location and domination’ found passing reference in the 1980s, it is only later that these questions become central to the analyses of the criminal legal system. The authors highlight that the symbols of the women’s movements in India are also minor, Muslim and tribal. Hence, it is possible to read Mathura’s story by pointing out that she was a subject of illegal detention in a police station in the first instance since her brother evoked criminal law provisions on rape and kidnapping against her lover. Her status as a minor legal subject who has no legal rights to move out of a domestic space wherein fathers or brothers maintain guardianship rights made her vulnerable to intervention by the police in the first instance. Just like the infamous Suman Rani case, custodial rape is a form of violence that may visit adult or minor women who choose their partners. Re-reading Mathura allows us to locate how rape and kidnapping laws are used efficiently against consenting adults and minors. This social use of the rape and kidnapping laws that marks the alliance between the family and the state however did not find discussion in the 1980s, or the discussions on how the rape law must be amended lately. We have also not given much thought so far to how does custodial rape act to normalize and indeed popularize rape as a mode of disciplining a social movement? Is custodial violence as a signature of state repression amenable to a macabre notion of forgery by other political figures such as political party workers? And if it is, is the immunity/impunity, an ever increasing realm that we must urgently attend to a la Kannabiran and Menon.

How is Mathura read through Manorama? One of the most important insights of this book is the insistence that the fact that state violence enjoys impunity from prosecution has to be analysed through the politics of location and identity. Kalpana Kannabiran places collective violence in relation to what she calls the violence of the normal times which is marked by multiple ‘guarantees of impunity’, while insisting that the ethnic or communal nature of custodial rape must be recognized. Ritu Menon evokes the aftermath of the partition to remind us that the discourse on recovery and rescue of abducted women was a communal project scripted in the name of national honour. Those women who had been ‘abducted’ within the community during partition did not get redress.

The essays make an important point and argue that the many campaigns against violence discussed in the book expand and reformulate the right to life. Indeed, the authors invite us to think through the category of ‘life’ in the realm of juridical interpretation and the everyday. Kannabiran’s reflexive essay on legal and judicial initiatives discusses the recent developments in the arenas of sexual harassment, domestic violence and sex selective abortion under the rubric of the right to life. The naming of rape as a violation of women’s right to life indeed has been an important act of judicial interpretation. However, although Kannabiran points out that the right to abortion must be exercised by women, and sex selective abortion exists in tension with the claim that women as a class must not be discriminated; it is not very clear to me why this discussion informs a commentary on campaigns against violence. It seems to me that a fuller discussion on the shifting meanings of right to life in expanding constitutional guarantees to women must find contrast with other contestations about ‘life’ such as those invested in the fetal being which pit the woman against her womb. How does the sociology of women’s lives interrogate juridical notions of rights?

It is clear that the meanings of life for the authors are not exhausted by analyses of state law. I read this book as a departure from other writings that may be termed as feminist jurisprudential writings in India precisely since the debate on whether feminists should privilege law as a mode of transformative politics has worked through a legal centralist position. The sources of law are not exhausted by state law. Feminist sociological perspectives on law recognize that there are multiple sources of subjection that women experience from a plurality of legal forms. The authors cite Kumkum Sangari’s argument that informal systems arrogate adjudicatory power to themselves to re-invent what is then called customary law. The denial of the right to life by non-state actors or bodies enjoys immunity by the state. As Sangari rightly argues that the dictates of non-state bodies (normalized in sociological literature as dispute resolution bodies in the context of violence against women) decreases the distinction between the public and private. In a forthcoming essay, Kannabiran has provocatively argued that we must look at the relationship between state law and non-state law since state law often mimes the techniques of punishment instituted by non-state bodies such as caste panchayats. Hence, courts regularly suggest that the rapist should marry the victim even though no state law holds this dictate. Kalpana invites feminist jurisprudential attention to the face of state law which looks like non-state law.

The context of plural resistance is directed at plural structures of impunity/immunity. In this book, Kannabiran builds a powerful narrative of how structures of immunity/impunity are instituted through specific techniques of governance and law by looking at the challenges to the ‘convergence of masculine power and justice’ or the ‘coitus politic’ which guarantees impunity to those who perpetrate violence against women (p. 129). While Ritu provides a powerful picture of how cultural and legal categories are challenged through pluralities of resistance. This is an engaging discussion of the campaign against sexual harassment in trains in 1989, the ballet on ‘war and peace’ by Asmita and a discussion of the Naga Mothers Association as the first mother’s association that took up the issue of sexual violence in South Asia. Even though Ritu thinks the NMA cannot be categorized as feminist, she says it is a womanist peace movement that uses motherhood and healing as resources for politics. It seems that the term ‘feminist’ needs further explication. Ritu’s account then traverses to the campaign that followed the rape and killing of Manorama. The subsequent protests by fifteen women who protested naked outside the Kangla Fort Headquarters in Imphal shouting ‘Indian Army Rape Us’ led to a campaign against the Armed Forces [Special Powers] Act. Ritu Menon describes the economy of resistance in which the naked female body speaks an angry protest of shame and blame. We saw recently how Pooja Chauhan’s semi nude protest against the lack of implementation of the Domestic Violence Act, through the streets of Rajkot was seen by many as a pornographic act. Should we then argue that the laws on indecent exposure or obscenity should not criminalize such forms of resistance?

Indeed, we are provoked to ask what pluralities of backlash mock the formulation of laws such as the Domestic Violence Act. One example that comes to my mind is of a self-styled men’s movement which lists on the internet the names and addresses of women who have ostensibly mis-used section 498A IPC under the category of ‘legal terrorists’, and names corrupt lawyers who have helped such women win their cases. These forms of representations use the logic of feminist arguments to project a world of terror where women rule men through the sexist techniques of sexual objectification of male bodies and as resources for wealth maximization. From Mathura to Manorama provokes us to reflect on how our stories of resistance will remain incomplete without a critique of how feminist politics is stalked by denial, forgery, mimesis and theft.

Pratiksha Baxi is Assistant Professor at the Centre for the Study of Law and Governance, Jawaharlal Nehru University.