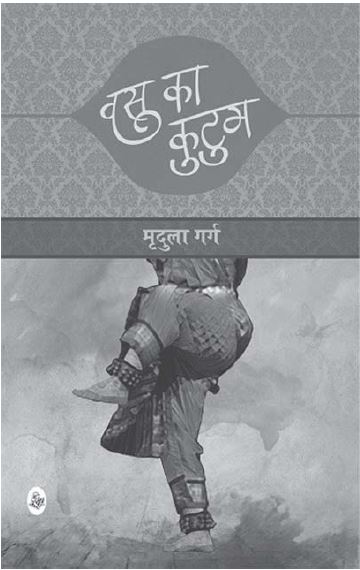 She danced to the demon’s death
And cried: play the drum, sound the gong
Dancing, she lost her own breath
And died: some dances tap to the song
Only for a moment, and go wrong.

That’s the denouement of one of the characters of Mridula Garg’s new novel—she dances and dies. Ratnabai begins as a minor character, a household help in an upmarket middle class neighbourhood in New Delhi, in the novel Vasu ka Kutum, and ends up with one of the most powerful scenes in the novel—performing the dance of death, more vigorous than Nataraj himself, as the author puts it. She dances on hearing about the death of another allegedly minor character, Sapotra, who is a builder, and who is always a reported character, never seen.

He’s not a venomous villain or a cruel killer to evoke such a reaction, but the scene is placed so strategically and beautifully in the novel, that nothing about it seems far fetched. It becomes metaphorical of the rage of an oppressed working class against the tall power brokers of the system.

When one uses the word ‘scene’, it becomes important to dwell upon the word, and talk about the dramatic quality of this novel. The novel has very few characters; they are well rounded and three dimensional, which lends depth to the plot; and yet also stand as characters representing certain ideas, which helps move the plot very fast—the work is all of 120 pages length.

The central character, Damini, herself is two dimensional in her name herself—the name is borrowed from the rape incident of Delhi of 2012 that evoked widespread protests; and yet very rounded as a character in her day-to-day interactions and vulnerabilities. That is the power of this work—it operates as a play of ideas, as well as a novel of very identifiable day-to-day characters.
In terms of plot, Damini, a thin, nondescript, unfashionable girl or woman (there is a lot of conjecture about her age by two characters, which is an interesting digression about our perceptions about people) comes as a tenant in an upper middle class neighbourhood in South Delhi. Despite her weak and wiry frame, she has a fiery personality and is often seen jostling with the local grocer over expiry dates of goods, or with the man who has demolished an old house to build a multi-storied building. This man is BK Sapotra, who was mentioned at the beginning of the review. He has not surrounded the construction site with corrugated sheets to prevent the rubble from polluting the neighbourhood; and has managed to flout this rule by constantly bribing the authorities. Damini gets into a scuffle with him over this issue, and he manages to win again and again by coughing up a little more of his black money. He is of the tribe who believes in the bribe—it seems that it would be cheaper for him to buy the corrugated sheets than get involved in so much attrition; but clearly the matter is ideological for both parties. The struggles are mundane, of mundane people, and there is no high drama; and yet the novel is quite dramatic.

It turns dramatic with Damini falling ill, and remaining indoors. She stops going to work at her NGO. Her illness cannot be attributed to the dust rising from the rubble of Sapotra’s building, but she keeps fighting against the builder through petitions. The grocer, Raghavan, gets worried about her absence and musters courage to go up to her house. He persuades her to take the services of Ratnabai as household help. The author raises possibilities of a romantic inclination of the grocer, which is where the novel becomes very human in its portrayal of a simmering emotional underbelly, which manifests itself in other forms—here with Raghavan struggling with the thought and finally accepting the tag of a ‘brother.’ Damini falls seriously ill, and is taken to the hospital by the motley family of Ratnabai as mother, Raghavan as brother and Najma, the sweeper as sister. That is what is recorded officially, and when questioned about it by the doctor, Ratnabai retorts saying that questioning the religious affiliations of her family members will send him to the jail. Damini’s boss comes to bail her out at the hospital, and says her NGO will raise funds for her treatment. Raghavan donates a gold coin to start the fund and money starts flowing in from various quarters. Damini dies. The fund, however, keeps rolling, and Raghavan is keen to get his gold coin back, lest his wife find out about it. That is when Ratnabai goes on his behalf to the NGO after his repeated queries, gets to know of the death of Sapotra, and dances, and dies. This death triggers a media debate about the use/abuse of the Damini fund, and the novel very deftly explores the sensationalism and politics of media. (One is reminded of Marshall McLuhan’s ideas of both ‘media is the message’ and ‘media is the massage)’.

What lends itself to suitability for stage performance in this novel is the surreal mundaneness of ordinary events that keep becoming extraordinary. There is such day-to-day realism to it, which writers are often wary to explore. Contemporary writers like to keep their distance from the immediate, for it is difficult to make sense of the fantasy that modernity is, one doesn’t know what is politically correct. Septuagenarian Mridula Garg however takes the collective guilt of the vocationally engaged and always apologetic middle class head on. Damini of the novel claims that she is the Damini of the 2012 tragedy; that it was some other girl who was taken to Singapore and she survived. Her age could be anywhere from the twenties to the forties—Raghavan is not able to fix this; she is grievously injured internally, and despite her huge media presence, she is also anonymous, and a struggler. She is everyone, she is ‘immense minority’—a huge number, a huge silent force infiltrating the majority that invokes and evokes patriotism on television. Raghavan obsesses over whether she is the real Damini or not, and even promises a gold coin to Ratnabai if she can find out. This collective obsession of singling out, of fixing a fact is undercut by Ratnabai who says it is immaterial whether she is that Damini or this. Raghavan had shied away from reading the newspapers when the Damini incident had happened, for his own daughter was involved in the protests against the government, and facing water cannons and lathis of the police. Protests are good for the television, not for one’s own children. Garg explores the margins, the writings in the margins and shows how the clutter on the wall is actually just a cacophony in response to dangerous silence.

This melting of imagined characters into real (Damini in the novel); and of real characters into the imagined (Raghavan’s ordinary daughter as an extraordinary protestor) is the hallmark of this novel, and it keeps showing us the looking glass. The media debates are also well depicted, the hyper-reality of it, the virtual juries that control destinies.

Another interesting aspect is the author’s preface where Garg recounts the trajectory of writing devices—from pen to dictaphone, through typewriters and computers. The writer had vision impairment during the creation of this work, and she spoke into a dictaphone and had it transcribed. It is an interesting idea to create the written word through the spoken, and which is why this work has a lot of conversationality and immediacy to it.

It would also be pertinent to comment upon the title. The title comes from Damini’s boss’s iteration of the Sanskrit phrase, ‘Vasudhaiva Kutumbakam’ or the world is a family as an assertion that Damini is not alone. The assertion of globalization of humanity and empathy meets its ironic other with the boss’s organization collecting money even after Damini’s death, and the boss fleeing to another part of the globe. The globe is indeed a big family for the oligarchs, as also a big field with a big yield built upon graves of many Daminis.

Amit Ranjan teaches literature at Zakir Hussain Delhi College of Delhi University. He is a recipient of fellowships like Endeavour, Inlaks and Fulbright. Two of his books are coming out soon.