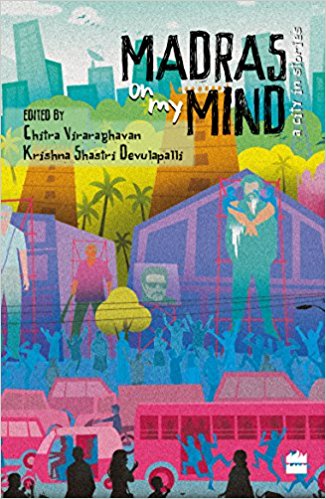 What is a city, but the people; true the people are the city
Cities can be huge or small, bustling or tranquil, charming or squalid, but the only question worth asking is: is it yours ?

Madras on my Mind, a collection of twenty odd short stories that takes us through tree-lined streets and mounds of garbage of Madras/Chennai as we wander through the patchwork of communities that piece the city together. There’s the Telugu settler whose earliest memories are bound up with it, an Anglo-Indian lad and his reminiscences of a laid-back life and men with Brylcreamed hair, the Gujarati community of Sowcarpet, and a Muslim girl growing up in a Tam-Brahm environment of rasam and Carnatic music.

Some of these stories are autobiographical in nature, the others fictitious and they run through the complete gamut of human emotions. Madras is at the heart of a child’s jingo where words once heard are strung together and chanted endlessly. It is a place of mild-mannered ‘curd-rice cricket players’. It is where a son attempts to shake off his dead father, who doggedly pursues him as smoke in his nostrils. For a small-towner it is a coming-of-age city. It is a place where love is found and love is lost or love is not found at all. There’s a longing for a city that once was, or is it longing for one’s time in the city, now forever lost ? It is Moore Market and Marina, Cooum and Covelong, Madras is this, Madras is that, Madras is this and that.

‘Split Ends’ is an evocative portrayal of a teenager’s loneliness, where the family comprises a single mother struggling to make a precarious living, and a discontented teen. A Sunday stretches endlessly, promising nothing more exciting than Maggie noodles. An outing with friends in a racy car, in an attempt to step outside of his life leaves Arjun feeling even more abandoned and heartsick. But, life’s knotty problems do not necessarily require a complex solution. There is a softening of all rough edges in the end, flooding the heart with warmth. ‘Mind Your Tongue’ set in Sowcarpet, is the slow elbowing of old Mittu Mama out of life, now that both youth and fortune have deserted him. All that is left to him is just his excellent memory of where ‘soft steamed idlis and ghee oozing pongal’ are available, for even that is out of his reach now. The visit of his dear friend Ghanashyam is eagerly awaited, as it also brings promises of a culinary delight. But Mittu Mama has not reckoned with a world which is full of killjoys. A casually tossed word and Mittu Mama is shattered. There is a palpable ache. ‘What other reason do we have to crush ants except it is the easiest thing to do?’

In ‘Orange, like Firecracker Flowers on a String’, Madras is a place throbbing with life, soaked in colours. Even the sun is ‘a sunnier shade of yellow’ here. What better place for a French tourist and her guide, both seeking to escape their dreary lives, to meet and fall in love for a few glorious days, a love that has neither a past nor a future but just the immediacy of a warm summer’s day.
Irony and sly humour twined together in ‘The Rise and Fall of Royal Ramana Rao’ hits one squarely and rather ungently in the face. Ramana Rao, purportedly a rice merchant—what he actually manufactures is ‘little white stones to adulterate rice’, is pulled into the cine world of Chennai by his palpitating lust. His ego is stroked, his mind lulled by pleasures that await him as a prospective producer of films. Like in a game of building blocks, desire is piled on desire when shortly before the denouement, it all comes tumbling down. A successfully sordid story.

In ‘Rendungattan’ the class divide works like a two-way mirror. Everyone knows a Muniyamma, like in Rendungattan—a maid who comes and goes as she pleases, leaving places dirtier than they had been, once she is done with them. The totally arbitrary nature of her presence, her loud, one-sided airing of her thoughts, as essential to her as breathing, her love of night-long ‘thiruvizha’ where religious festivals are celebrated with abandon, Tamil film music blaring loudly in the background, her complete and absolute belief in the world of spirits. This in counterpoint to the Brahmin mamis who call up each other to gossip about her liaison with the watchman, the narrator’s condescension as she relates how it is an effort for her ‘PhD ears’ to understand what Muniyamma says and that she ‘normally didn’t make the effort’, her ‘generously’ gifting her old, unwanted, broken things to Muniyamma. And ‘in her kinder moods’ even stoops to ask Muniamma about her granddaughter who is just as old as her son, and her progress ‘just to compare notes’. It’s the narrator’s patronizing perspective that leaves one breathless in the end.

Shanti teetering on the brink of adulthood in ‘Appalling Lack of Vice and Spice in Chennai’ has an endearing moral primness. She knows that ‘every moment of pure pleasure’ will bring on ‘an aeon of sorrow tempered by guilt and regret’. She would like to leap across the straight and narrow of her upbringing but stumbles and fails. Her romantic imagination paints Chennai as a city of infinite possibilities and she sees herself as perfectly capable of having an affair or two or why even three, but the end of her exams finds her dutifully if sulkily taking the train home. Even vice needs to be learned. When she once decides to play wicked, wickedness closes shop and goes home. Shanti is the epitome of the Chennai woman, she can and she would but just for now she won’t.

‘Objects of Desire’ and ‘Water and After’ both deal with the inclement weather that Chennai can sometimes be inflicted with. While the former is a nostalgic, light-hearted description of what a penchant for ‘potlum’ or weed on a rainy night can lead to, the latter also autobiographical, is a description of a real terror that had Chennai in its grip, in the winter of 2015—when for a few days, water acted as a great leveller.

Madras On My Mind is a lot like the city which it evokes, sometimes sultry, sometimes with a delightfully cooling breeze, the strains of Geeta Dutt’s Ajeeb daastaan hai yeh and the notes of Begada mixing and mingling. Readers who have invested time in this city will find bits and pieces of themselves again. The ride is roughshod at times for there are bumpy potholes, at other times the narrative races by like its famous autorickshaws, with no holds barred.

Sumitra Kannan. a freelance reviewer, has published in the Deccan Herald, Bangalore.