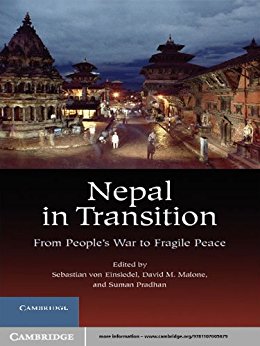 The Comprehensive Peace Agreement of 2006 ended the decade long conflict which had pitted the Maoists against the State in Nepal and claimed the lives of thousands of people. Although the peace process has begun, the situation still remains fragile and volatile. Disparate groups which were once united in the people’s movement for democracy have fragmented and regrouped around newer forms of identities. Adequate, equitable and inclusive deliverance of fruits of democracy seems still in waiting. The book under review is a dense collection of essays by eminent Nepalese and foreign academics, peace and development practitioners, journalists and business representatives on the complex nature and frequently fractured process of peace building in Nepal. The volume has attempted an in-depth interrogation of the peace process, accommodating divergent voices, notes of optimism as well as pessimism of its contributors on the future prospects of peace building.