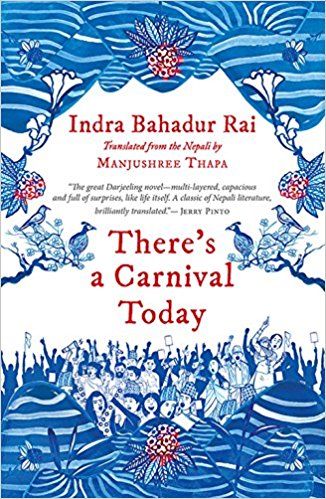 Two novels, one short story collection. Different themes. With one joining thread, West Bengal, the State which is the setting for all three works. While Amit Dasgupta’s The House and Other Stories and Arnab Nandy’s On the Road to Tarascon are set in Kolkata, a familiar locale in many stories and novels, Indra Bahadur Rai’s novel, (translated by Manjushree Thapa) There’s a Carnival Today, considered a classic of Nepali literature, is set in Darjeeling, with its mystical mountains and tea gardens. In all these works, the protagonists are in search of an identity, a new life, and the cityscape plays a crucial role in this journey that they undertake.

The first collection consists of three short stories, with Kolkata at the centre. In fact, Dasgupta tells us that ‘as all Bengalis will tell you, even when the city stands quietly in the corner, not saying aword, her presence may be deeply felt by those close to her’, and that ‘Calcutta is a city where it is difficult to keep secrets’.

We note here the use of ‘Calcutta’ as opposed to ‘Kolkata’, which is the modern-day usage. I would guess that the writer perhaps empathizes more with the associations that the old usage brings to the mind—an old-world cosmopolitan city, a melting pot of cultures, a city that still retains vestiges of the days when it was the colonial capital. At the centre of The House and Other Stories are ordinary everyday people living in this city and their relationship to the past. These stories take us into the minds of these people who breathe in its sights and sounds on a daily basis. From a house that takes on a haunted quality after a number of tragic incidents and almost possesses the protagonist in the first story to the sudden discovery of a diary that changes the direction of the life of a septuagenarian widower to the final title story, there is also another link among all the stories. In the first story, the protagonist is excited when he hears the story of Mohua Emily Dey, who lived in a house called Dey Mansion with her father, Parimal Albert Dey. Mohua had died more than a century ago, and the house has been said to be haunted ever since, with locals reporting unnatural happenings, and no one daring to enter. The protagonist breaks this taboo; he enters the house, hears Mohua’s story and his life is never the same again. It seems that he is under the spell of Mohua, both the real opium, and the opium that is associated with the house and its inhabitants.

In the second story, ‘The Little Red Book’, a recently widowed man goes to live with his daughter in Germany. After some time, he starts missing Kolkata and returns home. One day, he finds a horoscope that predicts his death a year later and starts noting his life experiences for his daughter, almost as an addiction. However, fate wills something else. Dasgupta gives his readers multiple messaging through this story—about life, death, superstitions and the like. The final story of the collection is the title story, ‘The House’. It is the story of a woman who loses her husband after illness. Her son takes her with him to the USA, but Monisha cannot ever call USA home. Home is always in Calcutta, all that her son’s place is a house for her. As someone who has lived under the shadow of her husband her entire life, she now finds it difficult to carve out an individual identity, made more difficult by the fact that she has to do so in a new, alien land. Through all these different yet unique stories, Dasgupta brings to the fore how individuals can be at home in widely different circumstances and spaces, even those that may not usually be seen within the usually accepted normative definitions of the term. Dasgupta in his clear, lucid style succeeds in weaving a collection, that may not be a bestseller but one that will surely stay with whoever decides to read the stories.

A very different kind of storyline and plot and can be seen in There’s a Carnival Today, written by the doyen of Nepali literature, Indra Bahadur Rai. The novel takes us back to Darjeeling of the 1950s, in the decade post-Independence and to the fractured socio-political times of the period. The novel is structured in a ‘disarranged’ manner, which reflects the way life is. Rai writes: ‘I didn’t see life as a singularity, or as the chemical purity and unhindered progress of a single subjectivity.’ Originally written in 1958, There’s a Carnival Today has as its protagonist Janak, a prominent businessman and local leader of Darjeeling. As the novel begins, Janak is at the centre of a huge crisis, and is staring at professional, political and moral ruin. His one-time friend and business partner Jayabilas has decided to sue him to recover dues owed to him. His son Ravi has disappointed him and revolted against his father by becoming a school teacher at the tea gardens, while Bhudev—Janak’s partner in the Party which is working to organize workers—has triumphed over him in a bitter struggle for leadership. And to top it all, his personal life is in shambles as he is attracted to Yamuna, even as he is married to Sita. The lives of all these characters are impacted by forces beyond their control, even as society is spinning into a whole new world in front of their eyes. By the end of the novel, life has changed irrevocably for all the characters involved, and they will never be the same again.
The novel intersperses a panoramic, beautiful view of Darjeeling, from a different time and era. The characters who inhabit the town are etched out well, and come across as real flesh and blood characters, and reflect the socio-political reality of the time. Even when we, the readers do not agree with the actions of these characters, we find it difficult to dislike them. They are like us—not black, not white, but with various shades of grey, a point further accentuated by Rai’s belief that there is no one single reality, and his deft and poignant storytelling. His technique of ‘Leela Lekhan’ comes in especially handy—an acknowledgement that life goes beyond being judgemental. There is no single, universal truth, our views and opinions are determined by our subjective positions. The novel can be seen in many ways as Manjushree Thapa’s tribute to the great doyen of Nepali literature. The translation succeeds in its objective of bringing Indra Bahadur Rai’s works to the ‘mainstream’ and making it available to a larger audience, beyond the Nepali speaking public. It is also an important text in terms of bringing Darjeeling to the forefront of literature, and a quest for identity. The fact that the work has become available in translation nearly half a century after the original does not make it dated, if anything, with the current political situation in the area, the text provides a perspective into the genesis of the situation.

The third work again transports us back to Calcutta, but with a historical connection. Arnab Nandy’s On the Road to Tarascon is a work in which fact meets fiction. For those unaware, ‘The Painter on the Road to Tarascon’ was an oil on canvas painting 48 x 44 cm. It is believed to be lost in a fire during the Allied bombings of Magdeburg during World War II, even though it survived the fire. The painting was saved by a British spy, Edward Bates and the curator of Kaiser-Friedrich museum, Herr Bormann. No one knows where the original is now, and it is reported as missing as on 12 April, 1945.

In the novel, actions are set off 65 years after the loss of the painting, when a letter emerges that leads to the chain of events. This is a novel, intriguing beginning to the novel, and the juxtaposition between the past and the present is achieved. The novel shifts between 1945 and 2011—the time when it was reported missing, and now, the time when various people are on the trail to find it. Herr Bormann, the then real-life curator of the Kaiser-Friedrich Museum now becomes a character in the novel, as he teams up with Edward Bates, a British agent and tries to save the painting. In 2011, a letter is part of a set of belongings handed over to Eva by her grandmother Claudia, one-time lover of the British agent, Bates and wife of Bormann. Eva Bose, on reading the letter sets off on a quest to track down the painting, which brings her to Kolkata.

Along with Neil, Eva traverses through continents, cultures and history. At every step they encounter new mysteries, where fact blends in with fiction. However, it must be said that the author’s own familiarity with Kolkata gives the description of the city a new dimension. The city, in which past and present live seamlessly together comes alive in its vividity, as described by Nandy. Where the work falters at times is in the handling of the plot. Some characters are introduced unnecessarily, there is more than unnecessary focus on the relationship between Neil and Eva. Some crisper editing and more detailing could have kept the mystery taut and more gripping.

Overall, all the three works present Kolkata and West Bengal in different ways, through the characters, descriptions and the panorama. My personal favourite would be On the Road to Tarascon but that is also because I am partial to the thriller genre. All the works are easy reads and would be recommended.