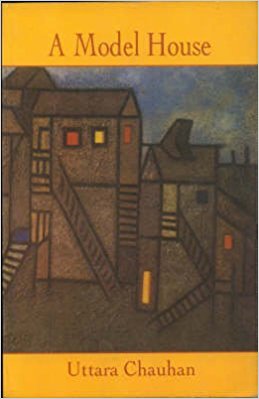 A surprising find, A Model House is a pot ­pourri, the author’s life and interests held up to a mirror for all to see. Alaknanda moves from being Al in the leafy suburbs of Wiscon­sin, living in a fairy-tale world of NRIs to Nanda at ABCD, a design and architecture school in Gujarat. In her final semester at ABCD, Nanda meets the enigmatic, Rajdoot-riding, beedi smoking, model-maker Raghunath Bhatt, younger brother to the legendary and dead Shivnath Bhatt. Almost immediately, the college girl is swept off her feet by his freedom and his charm, falling in love with him and spiraling into his life in the painfully mundane world of Lakeview Apartments.Into these spare bones, Uttara Chauhan thrusts a twisted kaleidoscope of lives, memo­ries and perspectives, from the past and present. There is the parable of political idealism as it wastes away into bitter corruption. There is the stoned world of Devji, the opium-addict. There is of course, the shining world of architecture and buildings, with its paraphernalia and politics..There is the bewildering and strange world of the expatriate. And most amusing of all, there is the vicious and pointed spearing of the “development games” played by NGOs and governments, with their acronyms and jargon, their motives and the unvarnished reality of the poor who are their playthings.

Charming as all this may be, the strength of A Model House really lies in its characters: Nanda the every woman; Raghu the gentle lover, the charismatic and mysterious, the creator of little worlds, a craftsman of exquisite care; Devji the addict with the guilty mind. But, on a plane above all these lies Shiva. Shivnath Bhatt is the hero in the background, who leaves behind in the little world of this novel his journal. Even in our world, there is still a dwindling possibility for heroes. Uttara Chauhan’s Shivnath Bhatt is just that; a heroic student leader, a brilliant architect, an uncom­promising idealist. Although dead ten years, he still hangs around in the shadows of this debut novel, leaping out every now and then and disappearing, like a myth haunting the edges of out imagination. He is incandescent, the symbol of changing times, muse to those who knew him, young and manic, visionary and depressive. When everything about this book fades away, Shiva will remain. We all knew a Shiva. Perhaps there was a little bit of us that was a Shiva.

There ate many everyday scenarios, set-pieces crafted with care, strewn throughout the book— the plight of neighbours who serve only to serve as suppliers of food and basic supplies, the careless world of the college student, the complex invented world of the NGO, the cocktail party in the American suburb, replete with snide comparisons, needling and gnawing identity crises. But all of these set-pieces are driven by the need to unravel the characters of the novel, the young and beautiful, the old and cynical.

A Model House is also a first person narrative (through the convenient medium of Shiva’s diaries) of the Navnirman movement in Gujarat. The narrator delves deep into memory, bringing up nuggets that add poignancy and romance to a story that could so easily have been ordinary. The only catch in an otherwise smooth flow of a book is the occasional lapse into studied verbosity when an overemphasis on detail tends to suffocate the narrative. These mercifully are rare and for the most part the narrative reflects the sincerity and deeply felt nature of the book. In the end, A Model House remains a fine first novel which betrays a great deal of promise.”

Satyajit Sarna is a second year student at the National Law School, Bangalore.