Migrants from the Frontier 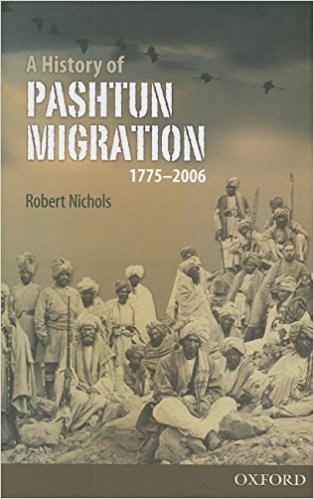 The rugged mountainous region straddling the border between Afghanistan and Pakistan have, for many centuries, produced large flows of emigration. Men (there were almost exclusively male migrants) variously described as ‘Afghans’, Pakhtuns’, ‘Pathans’ and ‘Rohillas’, speaking dialects today such as ‘Pashto’, have made their way in significant numbers into northern India, Arabia and beyond. Over two centuries and more, they have played crucial roles in a variety of inter-Asian dynamic networks of trade, credit and military labour. More recently, they are found in roles of semi-skilled blue-collar labour in the new centres of global capitalism, especially in the Emirates of the modern Middle East and in parts of Australia. Nichol’s project is to track the history of ‘Pashtun’ participation in the unfolding story of globalization since the late 18th century.

His approach is empirical, but very obviously (and to my mind unduly) influenced by Markovits et al and their idea of migration as ‘circulation’1 . But the author is to be applauded for taking this ambitiously long view, which has required him to deploy a variety of sources and research methods, ranging from the historical to the anthropological.

In this endeavour, his success is—not unexpectedly—partial. Some chapters are quite original and fresh; others inevitably depend heavily on syntheses of existing secondary literature. The first two chapters, which explore ‘Pashtun’ participation in the lively market for mercenary military labour in 18th century South Asia, rely a great deal on the work of Kolff2 , Gommans3 , Alam4 and Bayly5 . But they do add a new dimension to our understanding of this market, by showing how the Pashtun migrants’ networks enabled them to succeed in this highly fluid and competitive world, and to project their influence in and through the Rohilla kingdom. The third chapter, which traces the impact of the growth of British power of these networks, is one of the most original and interesting in the book. Here, Nichols shows how with the defeat of the Sikh and Rohilla kingdoms, Pashtuns sought employment in the kingdoms and principalities outside formal British control, chiefly Hyderabad and Rampur. There they supplemented declining incomes from military labour with investments in property and usury, resisted the great British pacification drive, and stood up to the Nizam’s not wholly enthusiastic efforts to drive them out of his lands. (Here is one point where the thesis of ‘circulation’ fails to explain: why did the Pashtuns fight so hard to stay on in India and show considerable reluctance to return to their ancestral homelands? Perhaps events in the Durrani empire, discussed in the recent work of Benjamin Hopkins,6 might provide an answer: why does Nichols fail to consider these?) The events of 1857 are seen here from a Pashtun/Rohilla perspective, and made more intelligible in the process. But here again, ‘circulation’ does not illuminate much. Curiously absent is a discussion of the ‘Wahabbi conspiracy’ of Sayyid Ahmed Khan Barelvi, whose purpose allegedly was to launch a jihad against British India from bases in Afghanistan, the homelands of the Pashtuns.