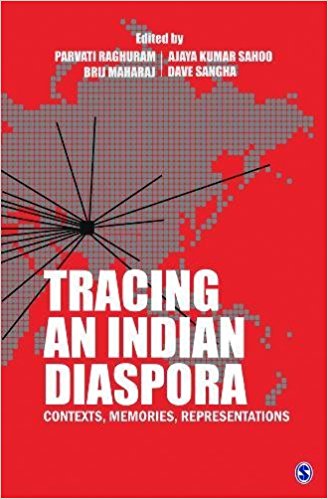 As a commemorative volume, Tracing an Indian Diaspora: Contexts, Memories, Representations celebrates the first ten years of the existence of the Centre for the Study of Indian Diaspora (CSID), Hyderabad and the annual Pravasi Bharatiya Divas, held at Hyderabad in January 2006. It presents not only a fairly comprehensive coverage of migratory movements of Indians to different parts of the globe but also explores the Indian diaspora as a category of practice by a wide range of actors in terms of what they think of themselves. There has been lately quite a rush of studies on the Indian diaspora published mainly in the USA, Canada, UK and Singapore and this collection comes out as a significant contribution to the study of the Indian diaspora published in India, along with its simultaneous entry from USA, UK and Singapore. As clarified in the introductory chapter, the research team at CSID put together a set of twenty papers for the book’s four sections. Its guest editors from three Indian diasporic territories, along with the editor located at CSID, ‘only minimally shaped the discussions in the volume’.

A remarkable feature of this collection is its eclectic selection of voices from both ends of the diaspora; authors located in India share almost equal space with Indian and non-Indian authors located in the diaspora. In this sense an exciting part of reading this book is the opportunity it offers to put side by side the viewpoints emerging from India and its diaspora. As such the book helps its reader to develop a perspective based on experiences and interpretations put forward by both the diasporics and those who study them. Each author’s gaze at the unstable balance of power in social and cultural relations provides not only ontological positions but also reflects her/ his epistemological assumptions.

Section 1 of the book concerns itself with the formation of the Indian diaspora and the settlements of Indian populations in the South East Asian region (chapter 2 and chapter 3), South Pacific archipelago (chapter 4) and the Caribbean (chapter 5). There is no serious attempt to cover the story of migration during the colonial period and discuss all aspects of the earlier forms and effects of the so-called ‘labor diaspora’. The chapters in Section 1 provide only a sketchy background to discussions to come in the chapters of Section 2 where the focus shifts from the ‘old indentured diaspora’ to the ‘new diaspora’. All articles in this section pertain to issues arising out of postcolonial migration from Independent India. The geographical scope here extends to the adopted homes of Indian migrants in the USA, UK and New Zealand. Discussions of the issues of citizenship (chapter 6), participation in political processes (chapter 7), immigration dynamics (chapter 8), heritage language transmission (chapter 9) and celebration of festivals (chapter 10) bring out the agency of migrants, unfolding the migrants’ new ways of constructing the sense of belonging in the new diaspora. In a way, all the chapters in the first two sections offer a representative picture of the old and new diasporas and disclose both the context of racial profiling of and the range of diversity among migrants from the South Asian subcontinent.