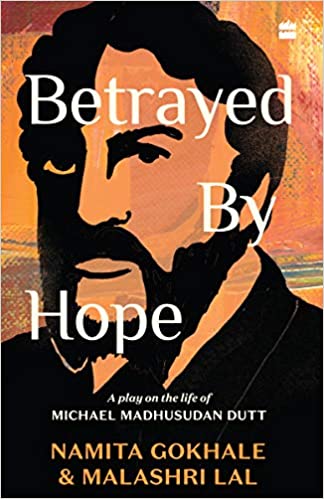 Jointly authored by Namita Gokhale and Malashri Lal, Betrayed By Hope is a play on the life of the nineteenth century poet, Michael Madhusudan Dutt (1824-1873). The play is based on extensive research by the authors spanning a period of nine years. A five-act play, the plot is structured around Dutt and the fictional character, Rubina Rahman or Rubi, a young researcher from Bangladesh; the poet is the subject of her research. Instances from Dutt’s personal life are interspersed with his journey as a writer who began by writing in English and later made a transition to Bangla. Extensive use of the epistolary form in the play creates a life-like picture of Dutt; on stage, he reads from letters written to Gourdas Bashak (his classmate at Hindu College and lifelong friend), other associates and later, in days of penury, to the social reformer Ishwar Chandra Vidyasagar.

Each of the five acts map different phases of Dutt’s life. Biographical progression is interrupted by Rubi, the Sutradhar or the narrator in the play. This dramaturgic device brings out different aspects of the writer’s life, while also providing pause moments to the audience to think about questions raised by Rubi. Act I presents a forty-five year old Michael Madhusudan Dutt looking ponderously at the work of his youthful days. The scene shifts to the young man of 17 years, enthused with the idealism of the Romantic poets, his teacher David Lester Richardson and Henry Derozio’s Young Bengal Movement.