Memoirs of an Indian Economist 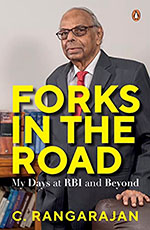 This book is the story of India’s monetary policy and its economic dilemmas written by a true savant and patriot who had to deal with a whole lot of crises. Dr Chakravarty Rangarajan, until his retirement in 2014, at the age of 82, devoted his entire life to serving the country in one capacity or another. He has been Deputy Governor at the Reserve Bank of India, member of the now abolished Planning Commission, then RBI Governor, the Governor of erstwhile Andhra Pradesh, and Chairman of the Prime Minister’s Economic Advisory Council. He is currently the Chairman of the Madras School of Economics.

He has also been Chairman of the 10th Finance Commission; President of the Indian Statistical Institute; the Founding Chairman of the CR Rao Advanced Institute of Mathematics, Statistics and Computer Science and former Chancellor of the University of Hyderabad.

And throughout these years Rangarajan has kept a low profile, speaking softly and wielding a big stick when needed to. One disadvantage of such an approach, however, is that such people don’t get the credit that is their due. Indeed, he dismisses his personal life as something of not much consequence and to be written about later if he can.