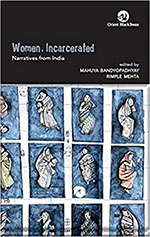 According to the National Crimes Record Bureau data available in 2016, there is a total of 20 women’s prisons in India, housing more than 3000 inmates. Tamil Nadu has the largest number of women’s prisons, five, and they are less than half full; while West Bengal, Delhi and Maharashtra each have one women’s prison and have more than full capacity of inmates. The NCRB also informs that an overwhelming number of women prisoners (122,984 out of 433,003) are unlettered and 181,672 of them have not yet finished their school education. Women, entering and exiting through the criminal justice system of India, are unskilled, undereducated, poor and consequently extremely disempowered.

These details are taken from the chapter ‘Redesigning Women’s Prisons for Correction’ by Upneet Lalli in the book under review. The book is important not only to make the reader aware of such details but also for reflecting on the interdisciplinary ways of studying women in prison. The editors, in their excellent Introduction, ‘Carceral Logics, Gender Justice and Resistance’, have drawn attention to the necessity of an interdisciplinary approach for several interconnected reasons.