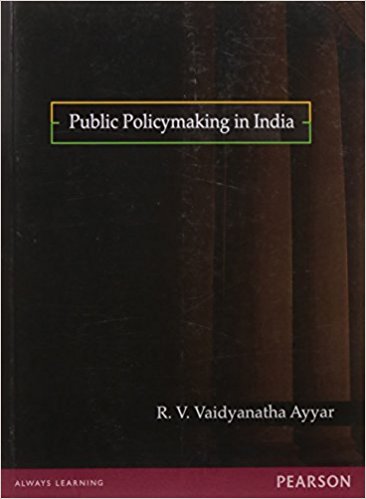 Vaidyanatha Ayyar has written a text book on the mechanics of policymaking in the country obviously for the graduate students of management in the institution where he teaches. He has adopted the format and style of the text-books commonly used in the American universities. The book accordingly contains boxes to highlight important aspects; it poses questions at relevant points; it illustrates the issues with distinctive bullets; and it cloaks the obvious banalities with grave profundity. The governing structure of policymaking in India is rather peculiar. It is a curious mixture of British and American type of institutions. The legislature is constructed on the architectural design of Westminster, though its functioning has been Indianized by brawls in the well of the lower house. The principal executive, the Cabinet, is constituted on the lines of its British counterpart, with collective responsibility as its main feature that has been diluted by the succession of recent coalition governments.

Nevertheless it continues to exist, at least in theory, on the support it commands in Parliament. The civil service again follows the Whitehall pattern and, unlike its American counterpart, is permanent and apolitical in character, not affiliated to political parties.

The two features that distinctly resemble the American system are the federal nature of the Constitution and the Supreme Court. The federation, with its division of powers between the centre and the states, was rather loaded in favour of the former from the beginning and the balance was tilted further by the introduction of centralized planning, by subsequent enlargements of the concurrent list of legislation and by the plethora of centrally sponsored schemes.Today, it serves as a convenient political facade for concealing the real unitary character of governance. The Supreme Court was undoubtedly American in conception; its jurisdiction prescribed on the same lines as its American cousin and its pronouncements in their width and scope resembling more and more the jurisprudence of that country.