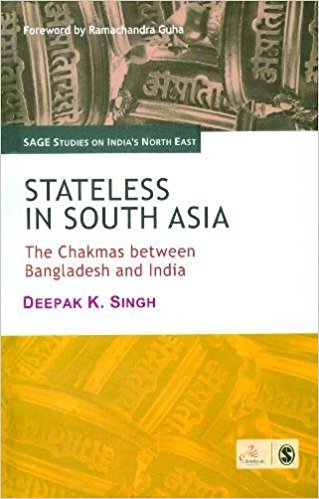 India has been the home for a large number and different types of refugees throughout the past.1 India has dealt with the issues of refugees on a bilateral basis. India’s refugee problem management generally conforms to the international instruments on the subject without, however, giving a formal shape to all practices adopted in the form of a separate statute. The current position in India is that they are dealt with under the existing Indian laws, both general as well as special, which is applicable to all the foreigners who came to India over a period of time. This is only because there are no separate laws and policies to deal with refugees. Singh focuses on the Myron Weiner thesis on how Chakmas become rejected people in Chittagong Hill Tract (Bangladesh) and unwanted people in Arunachal Pradesh (India).2 The study examines the interactions between the displaced Chakmas and the tribes of Arunachal Pradesh and historically explores the human predicament of one of the earliest episodes of mass displacement in the history of modern South Asia which makes for a holistic study of what turned out to be one of the most intractable refugee issues.

The Chakma influx into India can be traced to the partition of the subcontinent. Inconsistency and political expediency governed India’s policy vis-a-vis the Chakmas. The first influx of the refugees took place shortly after partition when 40,000 Chakma families fled to India. Having housed and absorbed a large number of non-Muslim Chakmas from East-Pakistan, India rehabilitated them first in North Indian states and later in the North Eastern states of India. The manageable number of the Chakmas, their widespread dispersal in the sparsely populated Northeast and their ethnic proximity largely mitigated any potential for opposition from the state government and civil society groups. Furthermore, absorption was feasible partly because ethnic consciousness in the Northeast was still in its infancy. Human rights violation in the region is very common. For example, the Chakma children have no right to get admission in schools, they are not allowed to get government jobs, the public distribution system is not open to them, trading licenses are cancelled, markets are not allowed to sell their goods, medical facilities are denied as well as electricity, drinking water, roads etc. are completely blocked.3 India’s refugee regime is yet to evolve a transparent framework linking rights, laws and policies. The treatment of refugees differs widely in India from state to state and is subject to much pressure from civil society groups.