A Bunch of Letters 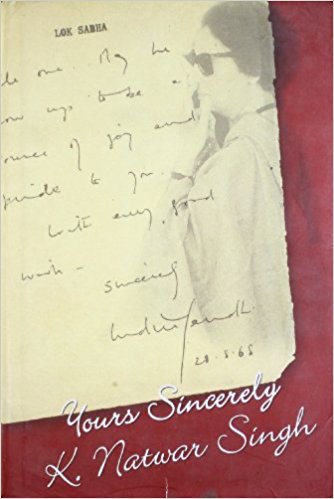 The author had resigned his post as Foreign Minister in 2005 following an unseemly controversy. Manmohan Singh’s letter accepting his resignation and the author’s letter to the Congress party explaining the allegations against him have also been included in this volume.

The letters here are necessarily a selective collection, but make for good reading, in a voyeuristic sort of way. Sadly, as Natwar Singh observes in his prefatory note, letter-writing is a dying art, much like the writing of essays that were de rigueur at one time. E-mails and text messages are quicker and more business-like, but there is no place in them for literary flourish, the well-turned phrase, the euphonic sentence that sounds good while reading well, and so on which marked an earlier gracious and leisurely era.Then again, the paucity of published letter collections reflects the much-lamented Indian neglect of historical narrative or even the preservation of that narrative. The present collection offers vignettes beginning with the sixties, essentially coinciding with the author’s official and public service.