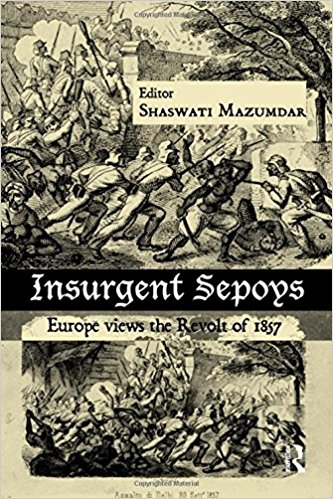 The Rebellion of 1857 has elicited a relentless flow of academic and popular responses, scholarly as well as polemical works, though unarguably, the fiftieth (1907), hundredth (1957) and hundred and fiftieth anniversaries (2007) have generated exemplary interventions on the nature, internal contradictions as well as inhering diversities of 1857.1 The book under review is the outcome of a research project, supported by the Indian Council of Historical Research (ICHR), and originated in the Department of Germanic and Romance Studies of the University of Delhi, following the 150th anniversary commemorations with an aim to map the European interpretation of the conflict.

While students of history, undoubtedly, are acquainted with Karl Marx’s articles on the Rebellion written for the American public in The New York Daily Tribune, as well as with the strident criticism of British atrocities voiced by Chartist Ernest Jones, yet global reception of the events of 1857 is a theme rather under-exposed to the historian’s gaze. The eighteen essays in this volume, spread over two sections entitled ‘News and Views’ and ‘Fact and Fiction’, address literary and media responses to 1857 in eight European languages.