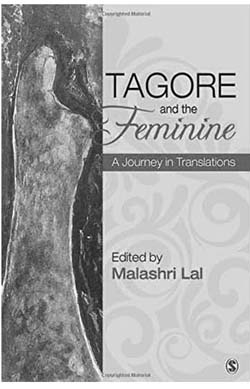 Walt Whitman, the American poet, essayist and humanist, had famously declared, ‘Do I contradict myself? Very well, then I contradict myself, I am large, I contain multitudes.’ Indeed it takes a brave man, and a wise one too, to not merely concede but celebrate the contradictions within himself. In India we tend to be apologetic about contradictions, especially among those we revere. And in the case of the much loved Bard of India, Rabindranath Tagore, the contradictions become problematic, to say the least. For far too long scholars have skirted around the problem areas and instead focused on those qualities of Tagore’s vast and varied ouvre that present no, or little, cause for dissent, namely his music, his aesthetics and his language. But those other areas, such as Tagore’s views on modernity, nationalism and most notably his views on gender have continued to pose several problems and have remained largely beyond the pale of sustained academic scrutiny.

Tagore’s 150th birth year celebrations followed by centenary celebrations of his winning the Nobel Prize occasioned some attempts to look at Tagore critically and comprehensively and to include within the ambit of analysis and pedagogy every bit of his immense corpus. Some attempts have also been made to deal with the ambivalences that an earlier generation of researchers had noted but refrained from elaborating given the near-iconic status enjoyed by ‘Gurudev’. Malashri Lal, Dean of Colleges and the Dean, Academic Activities and Projects at the University of Delhi and a renowned scholar of gender studies looks at a range of Tagore’s works to bring out his conception of the feminine. The opening line of her ‘Acknowledgements’ reads, ‘I came close to Rabindranath Tagore more through feminist theory than through my Bengali heritage.’ She goes on to elaborate that while she has many memories of her mother, aunts and grandmother reading out Tagore’s stories, as a probashi (non-resident) Bengali her approach to Tagore was ‘mediated by multiculturalism’ and her understanding ‘mingled with worries about Indian feminism’.
Tagore’s engagement—to use a modern expression—with the feminine as well as his portrayal of women is fraught with perils. If in one place he makes the following cringe-worthy statement, ‘There are two kinds of women, or so I have heard some pundits say. One is mostly maternal. The other is the lover.’ Elsewhere, he can also say, ‘Our nature holds together, inseparably linked, a willfully itinerant male, impatient of all bonds, and a shut-in home keeping female being … The one leads us outward, the other draws us back home.’ And so, ‘we are all ardhanarishvara: sometimes half and half, sometimes in unequal proportion.’
Lal draws upon a formidable array of sources—memoirs, letters, songs, poems, plays, short stories, travelogues, essays, lectures, even ‘Letters to the Editor’—to build her argument. As she writes: This book attempts to understand Tagore’s engagement with the feminine from the perspective of a contemporary reader for whom biological determinants and psychological assumptions of being masculine and feminine are questionable. Revisiting the ouvre of Tagore through critical sensibilities nurtured by feminist theory and gender studies, it becomes possible to read Tagore in new ways since his words are multivalent, the images mercurial and the emotions brilliantly nuanced. The contradictions are creative…Without recourse to theory as such, Rabindranath Tagore evolved his own principles for portraying the feminine in a marvelous range of expressions. It is left to his readers to relate his literature to contemporary life.
What follows is a culling from the many different kinds of writings that Tagore did which show, repeatedly, how the distinctions between the words ‘feminine’, ‘female’ and ‘feminist’ can be erased for a mind that is as bold and radical as it alive to change. Given below is a sampling of the many ways of ‘seeing’ the woman in his songs and poems: I am Chitrangada, I am the King’s daughter Not a goddess, nor an ordinary woman Worshipping me and placing me on a pedestal, that is not me, not me Neglecting me and keeping me behind, that is not me, not me If you keep me by your side in crisis and in wealth If you allow me to stand by you in all hardship and strife You will come to know me truly Today I merely make this submission— I am Chitrangada, the King’s daughter.
Elsewhere there is the pensive dewy maiden who sits by her window in ‘O janalar kachche boshe’, the friend to whom he could once pour out his heart in ‘Olo sai’, the voice of the Mother that resounds across the land in ‘Amra milechhi aj mayer dake’, the new bride who is expected to bring prosperity to her new household in ‘Sumangli badhu’, the dark village girl in ‘Krishnakali’, and so on. More interesting, possibly because they are lesser-known outside the world of Tagore scholars, are his views expressed through his letters, essays and lectures. In an essay entitled ‘The Indian Ideal of Marriage’, he ruminates on the difference between the Indian and the western idea—‘a difference which is not merely of outer method, but of inner purpose.’ In a letter to Margaret Sanger, founder of the birth control movement in the USA, he writes, ‘I am of the opinion that the birth control movement is a great movement not only because it will save women from enforced and undesirable maternity, but because it will help the cause of peace by lessening the number of surplus population of a country, scrambling for food and space outside its own rightful limits.’ Incidentally, Sanger printed Tagore’s letter in her Birth Control Review with the following editorial comment ‘Rabindranath Tagore has placed himself on the opposite side from the great ascetic’ referring to Gandhi who supported birth control but opposed artificial methods and favoured abstinence.
Taken together, Tagore and the Feminine: A Journey in Translations offers the many representations of the feminine for the serious students of gender studies as well as a smorgasbord of Tagore’s many different kinds of works through immaculate translations for the uninitiated.
Rakhshanda Jalil is a writer, translator and literary historian. Her works include, among others, Liking Progress, Loving Change, A Literary History of the Progressive Writers’ Movement in Urdu, (OUP, 2014).