Making Of A Jehadi 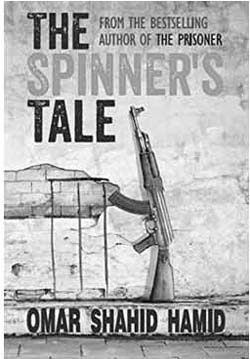 The Spinner’s Tale is a confusing title for this book. The Making of a Jehadi would have been a more apt title for it. It begins with an improbable scene. A master terrorist who has tried—twice—to kill the president of Pakistan is transferred by the police to a hole in a desert, that too near the Indian border (instead of being locked up in Kot Lakhpat jail, or any other maximum security prison, or shot-while-he-wastrying-to-escape on the way to one.) What is more, he is left there, in the hole in the desert near the Indian border, in charge of a bunch of rural policemen who have never before seen a jehadi, let alone kept watch over one.

But forget the slip. Read on. For the book is a thriller. And thrillers are always welcome, those on the Indian subcontinent specially so, for they are rare as diamonds. Moreover, this one has much to commend it. For one, it is written by the author of The Prisoner, also a thriller, and a bestselling one at that. For two, it is on an intriguing subject, the journey of an intelligent young man (the Spinner of the title) from the best school in Pakistan to the top of the jehadi pyramid in the country. Three, it is fairly competently written and, as behoves a thriller, moves along at an exciting clip (except during what can only be called commercial breaks, the sex scenes.) Four, its vignettes of Karachi, a city that the author obviously knows well, and its portrayals of Pakistan’s policemen and their ways, give it a fair degree of authenticity and depth. Its forays into the lonely world of desi students abroad, the hopeless world of aam log in Pakistan, and (more gingerly) the even more hopeless world of Pakistani politics, all also ring true. And its ending is terrific, simply killing. Be prepared, nevertheless, when you have finished reading the book, to feel somewhat cheated, at least disappointed. It may take you a moment or two to locate the cause of the disappointment, for it lies hidden in the very structure of the plot of the book. Consider these.
The master jehadi’s father is a government officer. His mother hails from Pakistani Kashmir. He is sent to the best school in Pakistan, where the elite of Karachi send their children, boys and girls. His closest friends in school are Adnan, a Shi’a, and (to complete the love triangle in the making) rich, beautiful and liberated Sana. The two go to the USA for further studies. He doesn’t. He stumbles into politics instead, and (after many pages filled with dosti, pyaar and preparing us for the doomed ending of the romantic half of the book) becomes a jehadi, taking the plunge at Kosovo, of all places. After returning to Pakistan and undergoing training in Afghanistan, he crosses into our part of Kashmir, ambushes and beheads a whole platoon of Indian troops, gets caught, is thrown in an Indian jail, but is released in exchange for the passengers of the Indian Airlines plane hijacked to Kandahar in 1999. Now famous, he turns into the most brutal and celebrated terrorist in Pakistan, beheading a pregnant western journalist before a video camera (for no special reason, only to become more famous,) generally causing mayhem, and attacking (unsuccessfully) the president of Pakistan.
Sounds familiar? That is because the author, fresh from the triumph of writing a best seller, has put together tidbits from several real jehadi events and lore (and, lest we forget, Bollywood) to give us a second thriller while our memory of the first one is still fresh. So nothing in the plot is new to the reader of even the daily newspapers. True, there is a fine twist in the tail. You sense it a few pages before the end, and you race through these pages in dread of it. But the journey from page 1 to page 288 is a long one, with few sights not seen before. Nor is the journey, even if more or less free of potholes, relieved by any laughs, smiles or food for thought. Speed is all. And at times even the speed suffers from the style that the author has selected for the book, of oscillating between the past and the present, never an easy way to tell a tale.
To the Indian reader, the book holds an additional disappointment. No, that is not the omission in the book of the role of ‘state actors’ in Pakistan in the real jehad against India. Nor is it the propagandist account of the sexual abuse of the captured hero in the Indian jail. What disappoints us is that the book, though featuring jehad against India, does not even attempt to answer any of the questions that trouble us. Why are so many people in Pakistan so keen to kill others in the name of God? If that is because they have been brainwashed, why are they so easy to brainwash? What is it in Pakistan’s culture that makes everybody in its establishment slip so quickly into a state of denial when charged with (proven) wrongdoing? . . . And finally, what does Pakistan want of us, really want of us?
The author has let slip through his fingers a great opportunity to write a worthy successor to his first book, maybe even a definitive novel on jehad. A pity this. Yes, Hamidsaheb, aapne sirf hoth geele kiye, pyaas nahi bujhayi.
Kiran Doshi is a retired diplomat and writer. His next novel, Jinnah Often Came to Our House, is due to come out in January.