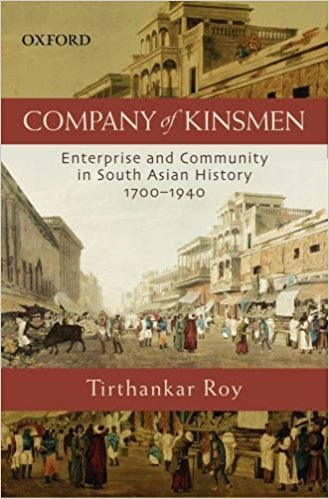 Tirthankar Roy has set out ‘to write an economic history of institutional change in South Asia’. A major theme in economic history is the institutional framework in which trade and commercial activities were carried on in pre-colonial societies. A legal system that guarantees security of property rights and enforcement of contracts is generally held to be a prerequisite for the conduct of business. Prior to colonial rule, India evidently lacked such a legal system, and yet had a thriving culture of internal and overseas trade and a highly complex commercial structure. Roy begins with the observation that the organization of social as well as economic groups as ‘cooperative communities’ was the institutional framework that made this extensive, complex system work. Roy calls this formation the ‘endogamous guild’, a ‘form of association (which) was more commonly found in early modern India than anywhere else in the world . . .’ based on ties of marriage and kinship.

Institutional economics has moved away from the notion that the pursuit of individual rationality is the most efficient way to maximize economic performance and growth, and recognizes that collectives which framed and enforced the rules of doing business in the past resulted in greater efficiency. Roy points out that this was particularly so because members of cooperative bodies had symmetric access to information, while individuals did not. He also adds that these collectives were not just a business model and have to be understood in the context of their political, social and cultural moorings. Since professional and occupational groups were also related through ties of birth and marriage, ‘rules about professional relationship . . . overlapped with rules about social interaction.’ Roy does caution that not all professional guilds in India were endogamous groups; however the latter was dominant in the organization of economic activity. By the mid-nineteenth century, however, these collectives were gradually becoming irrelevant. With the rapid development of the economic power of the West and globalization, the traditional forms of maintaining business relationships were inadequate. Also, Roy points out, the basis of entrepreneurship changed from risk-minimizing to risk-taking. This process of change across various segments of the economy is the main theme of the book.

The use of the term ‘endogamous group’ in the context of Indian society immediately suggests a reference to caste. Roy, however, points out that there were many other non-Hindu merchant communities in India like the Bohras, Parsis, Muslims and Jews (as well as many non-indigenous merchant groups like the Armenians) who were also endogamous groups. To refer to them as guilds is more problematic, because these groups were not like the formal guilds of Europe in their constitution or functioning, though the groups in India had the autonomy and judicial authority to arbitrate in business disputes and transactions which rendered them somewhat similar to guilds. The collectives generally functioned through panchayats and headmen, though across different economic classes—merchants, artisans, workers and peasants—the role played by these institutions differed according to the requirements of each. The state was an equally important player in this scenario; it guaranteed the juridical autonomy of the cooperative groups with reference to business transactions and management of property within their own community.

Roy begins with the basic question that has teased many economic historians: why did the ‘non-West’ not develop when the West did, and he pithily summarizes the mainstream response. ‘First, the non-West started with bad collectives and remained stuck with these . . . Second, the non-West started with bad collectives, and the Western colonizers, the bearers of good tradition, proved unwilling to conduct institutional engineering’ (p. 40). Both traditional economic theory and institutional economics are agreed in their conclusion—India’s economic backwardness was due to a predatory state that did not offer security of property rights, thus resulting in the weakness of merchant capital. Yet, later historians have shown the evidence of significant and extensive economic dynamism in merchant capital and mercantile activity in pre-colonial South Asia. So, we need to ask, what was the real nature of kingship that made this possible? Put simply, Roy makes the following propositions: it is accepted that the Indian state was not a ‘legislative’ state. The guiding principles of kingship were niti and dharma, or a state which followed a just and moral order, ensured peace and protection from external aggression. Rights to property were respected, and rules and practices regarding property were regulated, arbitrated and enforced by local communities and corporate groups. Even the Mughal empire, often painted as the ultimate ‘despotic Asian state’, accepted this juridical autonomy of the collective, community groups, so that from the Hindu kingdoms to Islamic rule was a continuum, rather than an abrupt break of tradition.

For the merchants, the corporate groups (guilds) ensured the smooth functioning of trade extending over a large internal market as well as overseas markets. Merchants were not comprised of a single endogamous or caste group. There were many different communities and castes which were engaged in commerce. Trade involved not merely buying and selling in different markets, but also services like money-changing, organizing credit and financing long-distance trade through bills of exchange and hundis or promissory notes. The different communities involved in trade recognized the need for a common, accepted code of conduct, and also that they had to work together to arbitrate in case of any disputes. Why did this long-established and stable system of cooperative functioning die out? Roy explains this as a two-step process. The opportunities offered by the great expansion of trade to Europe and industrialization between 1750 and 1850 led to an internal conflict between the interests of the individual and the community. The entry of several new players into the trade arena meant that in case of disputes even Indian merchants preferred to go to the colonial courts. These tensions and conflicts within the community were exacerbated after 1850 because of conflicts between the old and the new rich.

While I have no problems with the generalizations made by Roy, they do gloss over many regional realities and differences. For instance, the use of the term, ‘endogamous guild’. Pre-modern South India had many mercantile guilds whose members carried on extended trade within the region and overseas markets. There is nothing in the records to indicate that their collective identity was in any way due to the fact that they were an endogamous group, which would seem to indicate that there were cooperative groups who functioned without the ties of marriage and kinship. Secondly, by the eighteenth century, individuals from many non-mercantile castes were becoming merchant entrepreneurs in the European port cities like Madras and Pondicherry. They included mudaliars (landowners), velamas, balijas, brahmins and yadavas (shepherds), to name a few. These individuals obviously had to straddle the jurisdiction of their own caste panchayats with reference to certain matters, and to the larger merchant community with reference to trade disputes. Lastly, all of South Indian society (from Karnataka to Tamil Nadu) was vertically divided into two supra-caste groups of left and right-hand castes, comprising various castes (including merchant castes) in the caste hierarchy. How can these local characteristics be accommodated into Roy’s broader canvas?

For artisans, Roy says, the main role of the guild was in transfer of skills, technical knowledge and training. The world of the skilled artisan was quite different from that of the merchant, and there were many associational models at work in South Asia—endogamous guild, ‘brotherhood’ and professional guild. However, whether in the karkhanas under which production was organized in the north, or in community control as in the case of the Saurashtrian silk weavers in the south, the old forms of association and control of knowledge and skill were changing due to the changing nature of markets and external forces during the nineteenth century.

For workers, community associations provided bargaining power with reference to the employers. The mid-nineteenth century saw major shifts in the labour market, and was characterized by large-scale migration of workers, from rural areas to urban industry, from backward areas to employment in new activities like indigo and tea plantations, to overseas plantations as indentured labour. The recruitment and supervision of the migrant labourers were generally handled by a headman or sardar whose knowledge of the workers from his village or locality provided security both for the employers and for the workers. However, the inherent limitation of this system was that once the sardar exhausted his pool of recruitment, he became ineffectual. Also, as urban industrial employment became more widespread, workers could organize themselves without recourse to the godfather figure of the sardar. While Roy’s insights into the shifts and changes in work patterns in new activities (urban manufacturing, plantations) is of great interest, its applicability to rural labour is more limited, and accommodates neither the customary patron-client relationships formalized under the jajmani system, nor the extensive modes of tied labour in the rice-growing areas of Andhra Pradesh and Tamil Nadu, which were often forms of agrestic servitude for the dalit castes bordering on slavery. Roy concludes with a section on peasants and changing property rights and market in land as they evolved after the nineteenth century.

The macro historical framework adopted by Roy is both the weakness and the strength of the book. To cover all of South Asia meaningfully over two-and-a-half centuries is an enterprise fraught with many pitfalls, and that Roy has managed to do this—my stated misgivings notwithstanding—is no mean feat. The book is a work of prodigious scholarship and insights. Most importantly, it shows the way for further new avenues to be explored in the study of South Asian history.