A ‘Melting Pot’ of Fluidity and Dynamism 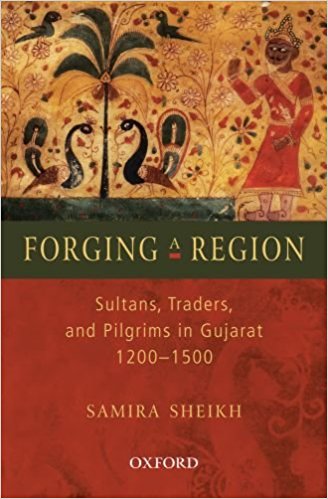 For more than a decade, researches in pre-colonial south Asia have attempted to show that the historical processes during the early and medieval period defied the current day notions of a fixed regional boundary, codified religious identities and immutable social categories of caste and occupation. The present work is situated in such an academic context. Based on an exhaustive analysis of epigraphy, texts, oral tradition and ethnographic reports, the book explores the evolution of Gujarat from the end of the twelfth century, when the ruling Chalukya dynasty was declining to the beginning of the sixteenth century, when the regional Sultanate of Gujarat was well consolidated. That the distinct homogeneous Gujarati cultural and regional identity espoused today has little historical basis is the central idea in this work. The history of Gujarat, especially during the period chosen for this study, was characterized by ecological diversity, constant migrations of invaders, traders, pastoralists and peasants—all of which kept altering the demographic, political and cultural map.

Such constant processes of change made this area a ‘melting pot’ in which a range of religious traditions, sectarian affiliations, economic activities and political negotiations interacted, thus imparting fluidity and dynamism. Seen in the context of changing configurations, the author questions the communalization and homogenization of the past that have influenced the historical consciousness today and have led to the construction of stereotypes which essentialize the religious communities, particularly the religious minorities. This book asserts the idea that there is a historical past that has to be analysed in its own terms and that the contemporary preoccupations with issues of regional and religious identities merely legitimize a particular kind of political agenda, of which Gujarat, the subject of current study, has been a victim.

Three issues are discussed in the five chapters that form the core of the book. One is the issue of ecological diversity in this region that influenced the occupational and social structure, in which trade and merchants remained dominant. Two, a large number of religious configurations that made Gujarat a ‘religious marketplace’ in which constant interactions and competition over patronage led to multiple identities that could never be agglomerated under the modern umbrella categories of ‘Hindu’, ‘Muslim’ and ‘Jainas’. Third, there were complexities that characterized the political negotiations and contestations creating a fluid situation of power, hierarchy and control.

Based on the patterns of settlement histories and topography, the first three chapters discuss the diverse ecological zones comprising eastern Gujarat (mainland), Saurashtra and the Rann of Kuchchh, with their respective political and social systems and historical experience. For instance, eastern mainland Gujarat, fertile with extensive river systems, attracted a large number of migrants and was the centre for the early medieval Calukyan kingdom, the Delhi Sultanate and the sultanate of Gujarat. Similarly, large parts of Saurashtra with its coastal network and the Rann of Kuchchh received little rainfall and had a concentration of numerous pastoral nomadic communities like the Jethvas, Cavadas, Ahirs, Bhils and so on, negotiating with each other over pragmatic issues of resource appropriation.In fact, the Kachchh region had a distinct history and language of its own, making it closer to Sind than the rest of Gujarat. The interaction between these distinct areas comprising the modern state of Gujarat was characterized by conflicts and loose systems of alliances and constant migrations of pastoralist groups, merchants, traders including the Arabs and Persian and religious functionaries. Thus the region of Gujarat was always in the process of settling down. By the fifteenth century, a large number of these nomadic communities were sedentized and became agriculturists.

However, mobility and circulation were the essence of politics and economy and state patronage came to be closely associated with trading activities and pilgrimage. All these regions, particularly the Saurashtra coastline, were a part of the maritime and inland trading networks with thriving port towns. The trade routes here were also important pilgrimage route connecting Cambay, Bhavanagar, Somanath and finally Dvaraka. Cambay was the port from where pilgrims departed for the Hajj to Mecca. The author asserts that even during the period of political instability, trading activities and urban centres continued to flourish, thus questioning the dominant historiographical view of the unstable political situation leading to a corresponding decline in trade. Further, the historical process of immigration and political significance of merchant groups in medieval Gujarat show that it was possible for a merchant to stake claim to political power. The work also states that the focus on trade did not lead to the neglect of agriculture. A large number of reservoirs and stepwells and an elaborate system of land tenure indicate the importance of agrarian activities. However, one doesnot agree with the author’s statement that since agriculture in Gujarat was already monetized and urban centres well developed, revenue extraction based upon the exploitation of the peasant labour was hardly present (p. 61). This gives an impression of a utopian egalitarian society without class conflicts, which medieval Gujarat definitely was not.

While discussing the historical geography and the economy, these three chapters on the basis of texts also analyse the process of settlement and resettlement leading to fluidity in the occupational and social structure. There were multiple occupational identities within the same clan, ranging from a ‘warrior-ascetic’, to a peasant, a soldier, a landlord, rich pastoralist, merchant prince, tributary chief and finally a big ruler. Some of these pastoral communities being political upstarts reinvented and laid claim to the ksatriya status of a Rajput. The narratives of the oral chroniclers, the Bhats and the Carans and genealogies and family histories composed by the brahmanas exalted their position by making them a part of the descent group that bestowed a prestigious ancestry and provided the legtimizing mechanism for political authority. Hence, the category of Rajputs comprised people of diverse political and caste status, including those who were Muslims. The author provides several examples of pastoral communities for instance, the Gohils, Cudasamas, Jadejas, Valas and so on who became the important Rajput clans of Gujarat and tried to conceal their pastoralist status and their Islamic connections in the later period. Such a study while aiming to reflect upon the heterogeneous social identities also questions the assumption of the ‘purity of race.’

Associated with the flexible occupational and social identities, were the equally complex religious identities that eluded any generalizations. In chapter four of the book, the author discusses the important religious communities of Vaisnavism, Jainism, Saivism, Buddhism, Ismailis, Sufis, Sunni Muslims and other popular cults of the various goddesses and maps out the intricate trajectory of religious development, whereby there was a gradual progression from fluid, interchangeable identities to that of a stable sectarian ones in the fifteenth century. It is pointed out that Gujarat in general, and Kachchh and Kathiavad in particular were, ‘frontiers areas of Hindu civilisation’ (p. 107) and had some of the most important areas of Hindu pilgrimage, viz., Somnath, Dvarka, and Girnar that later in the nineteenth and twentieth centuries became the centres of Hindutva identity and nationalist chauvinism. Emphasizing that all the religious communities were patronized by various political groups and in turn played an important role in politics too, the author points to the fact that the religious processes of temple destruction, conversion and pilgrimage should be seen in a broader context. Only those temples built for royal legitimation of the Calukyas were destroyed by the governors of the Delhi Sultanate and those that did not pose any political threat were allowed to flourish. The political groups in the post-Calukyan period hardly patronized temple constructions, which accounts for their decline, and instead concentrated on developing the ritual of pilgrimage. Sectarian tensions were present within the various groups comprising the religious traditions. Similarly, there were well established Muslim professional communities in these regions much before the Ismailis, Sufis and the Sunnis arrived that had little to do with religious conversion. In fact, the converts were often allowed to maintain their pre-existing religious practices that further contributed to the multifaceted identities. That the all-embracing, universal religious identities of modern times cannot be projected back into a past in which the dynamics of religious identities were different is brought out here. The concerns discussed in these chapters question the notion of a homogeneous religion, reflecting upon multiple contradictory interests that went beyond mere religious affiliations.

Amidst such diversities, the political negotiations between the pastoral communities and the rulers were based on tenuous and changing configurations. Migration was interwoven with political gains over the territories and legitimacy gained importance for the political ideology. Apart from genealogies, the author uses texts, primarily those commissioned by the political groups and inscriptions engraved on the hero-stones, stepwells, ponds and temples to analyse the ancestry as well as relationship in politics especially with the Delhi Sultanate and Gujarat Sultanate. The last chapter discusses that by the fifteenth century, especially during the reign of Mahmud Bigara, the famous sultan of Gujarat, issues of patronage, alliance and marriage formed an integral part of the political culture, with the Gujarat sultans stabilizing the situation by evolving a ‘regional consensus’ through distribution of landed rights and networks of control and coexistence as the case may be. Replete with interesting information like Sultan Mahmud Begara’s ancestry being a Hindu one with lineage traced to the epic hero Rama, the author provides numerous instances of the fourteenth and fifteenth centuries being a period of vibrant cultural developments as reflected in the literary productions in Gujari, Dingala, Hindavi, various versions of Apabrahmsa, Sanskrit, Persian and Arabic.

Though rich in details, this work suffers from repetitions in several places. Perhaps this cannot be avoided while dealing with such complex issues. The relevance of the work could be better highlighted if a detailed historiographical context was provided, which currently is limited to few pages in the Introduction. Possibly more maps and information, for instance, on the West Asian context of the Ismailis, even briefly stated, would have helped a reader not familiar with the region to get a better picture. This is not to deny the importance of this work, which is undoubtedly a valuable contribution to the studies in the evolution of a region based on historical processes that go beyond mere narration of political events and linear representation of facts. Besides, such regional studies also show that there was a rich historical trajectory outside the framework of the Delhi Sultanate and the subsequent Mughal Empire