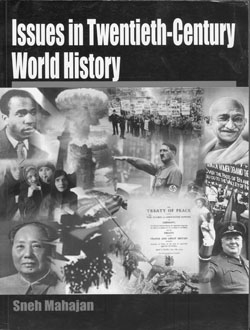 This volume is among the genre of narratives of major events concerning the twentieth century that have appeared in the first decade of the new century, e.g.: William R. Keylor, The Twentieth Century World and Beyond, International History since 1900; William J. Duiker, Twentieth-Century World History; and UNESCO: The Twentieth Century, History of Humanity vol.VII). Sneh Mahajan’s Issues in Twentieth-Century World History is perhaps among the first such attempts by an Indian author.

On the positive side, the book is written in simple and easy language, with little embellishment or bias, and without resort to any arcane social science or historical jargon. Its readership and purpose are spelt out by Sneh Mahajan in the preface as ‘. . . the graduate and undergraduate students of various universities as well as . . . the interested reader who wants to learn about the forces shaping the twenty-first century’ (add to the preceding annual aspirants for the UPSC Civil Services Examinations in India).

Those objectives are sought to be fulfilled in the fourteen sections which comprise the narrative. These are: Concepts and Definitions; Political Geography of the Globe, 1900–14; The First World War; The Russian Revolution; Political and Economic Developments, 1919–39; Rise and Fall of Fascism; The Second World War, 1939–45; The Cold War; Colonialism and Nationalism: End of European Empires; Globalisation and its Implications; Human Rights; The Feminist Movement; Ecological Changes and Movements; and Trends in Culture. An eclectic but adequate bibliography of about three hundred books is appended to a volume comprising some 350 pages. Nineteen maps relating to important events or the subjects are also provided for the benefit of the reader (these could have been drawn clearer and made visually more appealing).

The topics covered in the chapters are self-explanatory and their contents evident, and therefore do not need elaboration in a review. Where the individual themes are contentious, as in the specific and wider literature relating to each of them—imperialism, nationalism, the causes of the First or Second World War, the Cold War, etc.—the author has, fairly, included the contending analyses without pushing her own advocacy of one or another viewpoint. The book is also a relief from those which only provide western-oriented analyses of these events, . . . e.g.,studies that gloss over the accommodative role of England and France towards Hitler’s Germany in the inter-war period; or, under-report the heroic and bloody sacrifices of the (then) Soviet Union and its people in crushing the Nazi regime.

The first chapter, ‘Concepts and Definitions’ is a careful summation of the way in which the author has approached her task and organized it for the purposes of the study. The perspectives delineated aid considerably in creating an overarching frame to understand
the format and content of the chapters that follow.

It may not be obviously necessary for the book in review, but I would think that the initial pages could have included some reference to the current turmoil in approaches to the study of history, or ‘historiography’ as a backdrop to the events discussed in this volume. While ‘histories’ have been written since the time of Thucydides, Sima Qian, and Ibn Khaldun, what we consider as ‘history’ now is of fairly recent vintage. It is in the late nineteenth century that (mainly) German scholars, along with British and French historians, concluded that earlier traditional histories which devolved from events in the ‘four dynasties’—China, India, Turco-Persian and Greco-Roman—should be recast around the primacy and achievements of Europe.

And so it has remained—until recently. Now, there is another churning to review the premises of writing history, e.g., Fernand Braudel and others’ attempts to work within a ‘World Systems’ context; or, the more recent 20th Century Research Project initiated in the Federal Republic of Germany. Those interested in looking further into the premises and debate on how to go about writing ‘global history’ for the twenty-first century, could begin by reading, Shapes of World History in Twentieth-Century Scholarship, prepared as a pilot project by Jerry H. Bentley for the American Historical Association.

The fact is that the contents and format of this book must be judged as amenable, ultimately, to being more than just a record of events (or ‘issues’) which occurred in the twentieth century. That requirement should apply to the endeavours of all writers who attempt such narratives—particularly (but not only) those from the ‘rest of the world’. So far, beginning in the late nineteenth century, the inhabitants of the non-western world have been consumers rather than producers—except peripherally—of the world’s historiography originating from Europe or America. It is true that the author here articulates more than a chronology of major markers of the twentieth century, but we also need to begin to place a different set of signposts from ‘our’ perspectives to those western-derived premises of twentieth-century human events.

Let me explain. We automatically use the term ‘First World War’and ‘Second World War’ without demurral to describe the events of 1914–18 and 1939–45. During both these carnages, the peoples of the colonial empires were nothing more than cannon-fodder, and their territories no more than either the barracks or the staging arenas for the warfare of Europeans and Americans. The formerly-subjugated countries supposedly fought for ‘freedom and liberty’ even as they provided vast armies from amongst enslaved populations to their European masters. In the circumstances, could one not, arguably, make a persuasive case for redefining the First World War as the ‘First All-European War’, and the Second World War as the ‘All-Euro-American-Japanese War’? The mere change in the such nomenclature would modify our understanding and appreciation of those two particularly destructive events. One could provide many other examples of how a similar change in terminology could lead to change in perception of many historical events that we otherwise take for granted as ‘is’.

There remain a number of other ‘Issues’ which could be suggested as meriting separate inclusion in future editions of the book. Genocides committed in the twentieth century; Terrorism and its metamorphosis into new forms and spread worldwide; Disarmament concerns relating to conventional and unconventional weapons, as well as the impact of the new ‘revolution in military affairs’.
The author has also included some droll findings in the book. We are informed in section 14 on Cultural Trends that the British, hostile or indifferent to the local performing arts, deigned from introducing ‘European music to India, except in the form of military bands’ (p. 325). Having been reared in boarding schools in the 1940s I can vouch for being subjected to ‘Rule Brittania!’ and ‘We’re Gonna Hang our Washing on the Siegfried Line!’—and other military ditties—rather than being introduced to the symphonies of Bach and Beethoven.

The book is a good read. I recommend it to all those who would like to refresh their memory or learn about the great drama of, ‘. . . the most populated, most inventive, most technologically progressive, most medically advanced, most communicative, most warlike and most murderous century in history’.

There are some misses in the bibliography, such as Paul Kennedy’s Rise and Fall of the Great Powers, or of Fernand Braudel’s immensely illuminating and prolific studies of civilization, capitalism, the Mediterranean world.