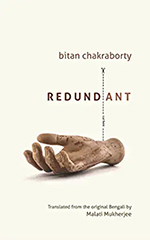 The city of Calcutta, like a heaving Leviathan is forever pulsating with energy carousing in its veins. This timeless vitality has been captured in famous novels of the nineteenth and twentieth centuries, but the trend has continued into present times through a perceptible fascination with the dynamism between the place and its people. Authors for whom Calcutta is the main actor in the plot are too numerous to be named but Rabindranath Tagore and Premendra Mitra among the early masters, and Sunil Gangopadhyay, Amitav Ghosh, Amit Chaudhuri, Jhumpa Lahiri and Kunal Basu among our contemporaries come easily to mind.

Bitan Chakraborty’s novel Redundant, originally published in Bengali as Haat Kata and now translated admirably by Malati Mukherjee is touchingly evocative—redolent with memories of a familiar city yet opening out corners that lurk behind curtains of gentility. After reading this novel, the salesman in a shop will never seem faceless, or the lad at a lottery booth appear to be a ruffian. Chakraborty has the uncanny knack of humanizing the marginal people who arrive at the ‘city of hope’ (if not joy) and following them through the tragi-comedy of survival. As one character says, ‘It’s easy to come to this city; but difficult to stay on.’

The writer’s eye is first trained on Kanak, a salesman in an ordinary garment showroom, desperately aiming to win the ‘Employee of the Month’ citation that can be framed on the wall behind his counter. His competitor is a winsome sales woman on the next table to whom most customers gravitate and who consistently achieves higher sales than him. The daily grind of chasing sales targets, set impossibly high by the proprietors, leads to comic situations such as who can reach the new consignments first and select the best offerings, or who can drag the mannequins early to create the best effects. The interior monologues of Kanak are delightfully recorded. He pleases his customers and smilingly unfurls heaps of clothes in search of the ‘perfect matching’, while seething with resentment at having to fold everything meticulously again—and this process constitutes the cycle of his life.

Kanak’s housemate is the second protagonist, Shubho, an immigrant from the village who is desperate for a job. Barely managing with random sales of men’s cosmetic products in the daytime, and minding a lottery booth in the evenings, Shubho prints out a CV every day, attaches a photograph and peddles his expectations at unwelcoming offices. Kanak, to whom he appeals regularly for any petty job at the garment showroom, doesn’t have the heart to destroy his dreams of employment but quietly shreds the CVs every day. Meanwhile, the housemates subsist on ruti and ghugni, cheap street food, unable to admit that they are ‘failures’ in the material sense. For both, troubles erupt in their workplaces, minimalist though these are, and even survival becomes perilous. Despite the pathos, the bleakness, Bitan’s novelistic pen refuses to record despair and prefers to speak of hope. In memorable lines from the novel: