Literary Engagements with the Politics of Peace 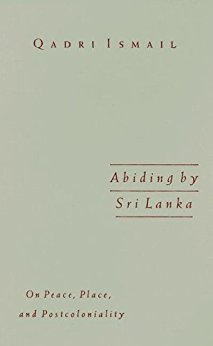 Responsibility. Being based in the UK but working within a field that might be delineated as Sri Lankan studies, I have thought a lot about that word recently. What responsibilities impress themselves upon the writer/researcher who works on/in Sri Lanka? Do these vary according to whether one is outside or inside its borders? As an ‘outsider’, how should one responsibly speak to the question of politics? Qadri Ismail’s absorbing and provocative book Abiding by Sri Lanka, tackles these and many more questions as it formulates its own attempt to speak to the question of peace and politics in Sri Lanka. Ismail is a Sri Lankan born, North American trained English Professor now domiciled in the US. Abiding by Sri Lanka makes a series of postcolonial, critical theoretical and ‘leftist’ literary engagements with the politics of peace in the Sri Lankan context. Its introduction, four substantive chapters and conclusion consist of a series of brilliantly polemic, often rambunctious, theoretical arguments and readings that advance the thesis that imaginative literature holds the potential to speak productively to the question of sustainable and just peace in Sri Lanka (that is peace conceived as more than merely the cessation of hostilities, as either Sinhala or Tamil nationalism might advance it).

The book asserts that (good) literature is able to creatively interrogate a pervasive Eurocentric, identitarian and anthropologizing logic that saturates the post-Enlightenment Social Science and Historical scholarship that has framed Sri Lanka’s civil war simply as ethnonationalist conflict between Sinhala majority and Tamil minority. Literature’s postcoloniality is its possibilism, its creative élan that holds the potential to deconstruct the binarized, identitarian logic that promulgates Sri Lanka’s civil war as incontrovertible clash of majority and minority nationalisms. If this formulation is progressive in the most exciting of ways, Abiding by Sri Lanka is also frustrating and stultifying in other ways, particularly in its dogmatic insistence that Social Science, Anthropology in particular, are doomed to fail the question of just peace in Sri Lanka because of their inescapable generalizations and objectifications.

Ismail begins by advancing what he calls ‘post-empiricist’ engagements with Sri Lanka and Sri Lankan texts. Post-empiricism rightly reminds us that anything written about Sri Lanka re-presents, in a constitutive sense, the subject of the text as object. In other words, when we write about Sri Lanka we are always already implicated in its dynamic, textual production. By the same token, the disinterested, detached ‘objective’ viewpoint, insofar as it might be claimed by any writer, is a fallacy that emerges with Enlightenment knowledge structures that pretend a separation between signifier and signified. Instead of angling for disconnection then, or obsessing over whether one is inside or outside a political debate (to the post-empiricist, anyone writing about Sri Lanka is inside and interventionary somehow), Ismail productively suggests ‘abiding by’ as a useful ethical signpost for any writer to responsibly engage Sri Lanka. The crux here is to be doggedly persistent about speaking to, intervening in, and negotiating politics through one’s work, whilst not confusing the theoretical as political. This opening chapter offers particularly enabling and dynamic signposts around how the Sri Lankan studies writer/researcher might orient an ‘abiding’ sense of responsibility through their iterations. Given Ismail’s acknowledged intellectual debt to Edward Said, it is not surprising that this charge is reminiscent of the Saidian injunction to ‘speak truth to power’.

These ethico-conceptual manoeuvres lay the foundation for Ismail’s critical theoretical, post-empiricist readings of the texts that follow. But first, he outlines his take on postcoloniality in a chapter that firmly equates empiricist, Enlightenment knowledge production—ways of coming to know, classify and hence essentialize an ‘object’ world ‘out there’—with Eurocentric, colonial and anti-colonial Anthropology. Anthropology, Ismail writes, is structurally and inescapably mired in ‘relations of knowledge production that emerged with colonialism; it will always be us writing of, speaking for, them’ (p. 7). Postcoloniality for Ismail then, is the move beyond any form of Eurocentrism, beyond any form of Anthropology. It is curious however, even structurally inconsistent, that Ismail finds the inspiration to critique such Enlightenment Anthropological knowledge structures in figures like Pradeep Jeganathan, Partha Chatterjee and David Scott; all of whom work within the Anthropological disciplinary formation, and in the South Asian context have been at the forefront of efforts to set forth productive modes of post-structural and postcolonial Anthropological knowledge production. It seems that Ismail confuses post-Enlightenment ‘anthropologizing’ knowledge production—which any disciplinary formation can be guilty of (yes, even literature)—with Anthropology itself.

Chapters 2 and 3 engage in lengthy critical, deconstructive readings of two historical texts: K.M. de Silva’s Reaping the Whirlwind (1998) and A.J. Wilson’s Break up of Sri Lanka (1988). Whilst Ismail suggests both texts ‘abide’ in some capacity, his readings show how they in fact ‘abide by’ Sinhala and Tamil nationalist agendas. Importantly, and bravely (abidingly so), Abiding by Sri Lanka teases out the continuous threads of cosmopolitan Sinhala nationalism braided through de Silva’s authoritative historical narrative. Ismail’s analysis reveals how this narrative logic frames the conflict as the inevitable consequence of an ethnic majority’s historical oppression. After all, what is more ‘natural’ than a whirlwind? (p. 37). A.J. Wilson’s Break up of Sri Lanka is read as a historical counter-narrative that abides by a Tamil counter-nationalist logic and agenda. Its existence is only possible because of the (anti)colonial logic that naturalizes ethnicized, communitarian identities; the very same logic that pervades de Silva’s narratology. These chapters convincingly show how history writing in the Sri Lankan context is political. Both texts are ultimately flawed according to Ismail, because they conceptualize lack of peace in Sri Lanka as a problem of (positivist) history, not of politics itself. They are unable to tease out a broader, more serious, structural problem that is the inability of Sri Lanka’s representative democracy to allow for anything other than majoritarian (read Sinhala) rule.

Literature, Ismail contends, is able to speak to these political questions precisely because of its creativity, its epistemological situatedness within the singular, unverifiable and imaginative, as opposed to Social Sciences’ and Histories persistent redress to what can be verified through generalization. In chapter 4 he proceeds with what are extremely productive and insightful readings of two texts that speak politically to the question of just and sustainable peace in Sri Lanka: A. Sivandan’s novel When Memory Dies (1997) and E. Macintyre’s play Rasanayagam’s Last Riot (1993). Through a mix of imagination and realism, creative emplotment and character incarnation, both these texts hold out the potential to mobilize politics, ways of thinking and possibilities beyond dependent and binarized Sinhala and Tamil nationalisms. Following these readings, Abiding by Sri Lanka’s concluding salvo is a post-empirical and postcolonial critique of democratic, majoritarian political philosophies that it suggests are driven by that fallible logic of verifiability, identification and generalization from which the Social Sciences and History cannot escape. Learning from literature, the conclusion suggests dialogic and conversational re-theorizations of democracy in Sri Lanka that bring subalternity into representation.

Abiding by Sri Lanka is at times inspiring, particularly in its conceptual road-map toward responsible, politically challenging forms of scholarly intervention within Sri Lankan studies. The readings it offers are instructive and intellectually liberating. But there is much about the book that begins to grate. Much of the argument the book develops is pitted against that notion of Social Science and Historical knowledge production as inherently reductive. Ismail is both consistent and insistent in his claim that the Social Sciences can only find significance in ‘grouping things together, producing identity out of difference, working with arithmetic, and producing analogy as self-evident, as opposed to a literary trope’ (p. 226). Even more categorically, ‘social science is allergic to the singular; it must repress difference’ (p. 227). That particular types of Social Science have a history of normative data gathering and nomothetic extrapolation is not under dispute. However, the jaundiced depiction of the Social Sciences as mired in a predilection to generalization and categorization is not just inaccurate, it is also a sweeping generalization itself that lazily produces a ‘social science identity’ out of what is a vast swathe of different modes of Social Science knowledge production and theory culture. More broadly, and ironically, blithe generalizations pepper Ismail’s text: ‘[de Silva] is concerned about Sri Lanka—unlike say a Spencer’ (p. 39, own emphasis), or ‘Does the [leftist] … seek to refashion democracy, as a Lani Guinier might desire…’ (p. 226, own emphasis). Through such rhetorical panache, leaps are made from the singular to the general; ‘a Spencer’ stands for Anthropology, ‘a Lani Guinier’ for the Social Sciences. Disciplinary formations are thus ‘spoken for’.

Readers of Abiding by Sri Lanka will also be struck before long by the often overly acerbic tone that Ismail uses to land his critiques. From the characterization of the orthodox Marxist critiques of postcolonial theory as ‘pathetic parodies of a Leninist polemic’ (p. 19), to the assertion that ‘my aim here is not to embarrass [the historians] Appleby and company (they do that job too well themselves)’ (p. 159). Despite the book’s obvious commitment to a polemical style of writing and the early admission that ‘it is part of the argument here that comrades can and must disagree’ (p. xii), this caustic tone soon begins to undermine what are otherwise intellectually and politically innovative critiques on their own terms. To come back to the question of responsibility, little is done with humility in this book. One wonders how such brazen vilifications and humiliations might set forth the productive dialogic and conversational re-theorizations of peace that Ismail urges in the concluding chapter?

Despite these misgivings, perhaps because of them, I found Abiding by Sri Lanka to be a very productive and provocative read. It is intellectually and politically generative, as brave as it is brazen, the kind of book any Sri Lankan studies scholar will not forget easily. One final observation concerns the book’s availability. Abiding by Sri Lanka is published by the University of Minnesota Press, available for 25 US dollars or 2,794 Sri Lankan rupees (1,004 Indian rupees) at today’s exchange rates. As I write this review there is no South Asian edition available at an affordable price. One wonders how the desire to ‘abide by Sri Lanka’ sits with such commercial facts?

Tariq Jazeel is with the Department of Geography, University of Sheffield, UK.