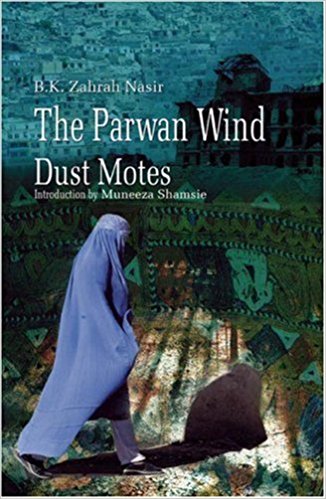 The Parwan Wind is a book about the revisiting of a revolution. The book records the second visit of the Scottish author, B.K.Zahrah Nasir, to the country of Afghanistan which has been in the grips of turmoil for a long time now. Having first been there in 1983 to cover the Mujahideen revolution, she enters the country again in 2004 after 21 years with great trepidation. By now she has remarried and settled in Bhurban, Pakistan. Zahrah Nasir’s home there is located in the hills of Bhurban, pristine as they are. She has apparently found peace at last and also her true identity—an identity which is very much constituted by her Afghan experience. It is as if her encounter with the Mujahideen has been an initiation into a world where a part of her belonged all along. Zahrah Nasir’s connection with Afghanistan is somehow bound with the fact that Afghanistan is a mountainous country with strong winds blowing across it. Her imagination refuses to surrender the image of Afghanistan as a rugged land, the Parwan wind in some sense generating a sense of fascination and might into it. The reader gets a feel of the nature of her connection with Afghanistan when she says, Mountains have a lot to do with my life.

I cannot settle without them. I am a mountain person at heart. Mountains and my own home and land … this is the total sum of my security.

When she uses the term ‘my own homeland’ she seems to conflate in her mind both Scotland, where she was born, and Bhurban, where she now lives. The book begins on a note of intense expectation, almost as if with bated breath. Reasonably so, for the act of returning to Afghanistan and re-establishing contact with Commander Gul Ruz, the commander of the base camp where she had spent her days last time, the only woman among a camp of 1500 men, carried within itself the possibility of both affirmation or, on the other hand, complete annihilation.

Zahrah Nasir’s first book The Gun Tree talks ostensibly about the Mujahideen experience but on another plane records the beginning of the process of negotiation of the 27 year old Pam Morris, (now B.K. Zahrah Nasir) with her own sense of identity. Fondly named ‘Banafsha-Khomar’ by the Mujahideen, Pam finds true acceptance of herself, regardless of gender or creed for the first time in her life in this camp. The toughness and fearlessness of the Mujahideen, (generally regarded as a function of masculinity) became the very reasons for the unconventionality and courageousness which is required to accept a woman into the fold of humanity, a being as much whole as the male being. The mulberry tree, on which the Mujahideen hung their guns when not in action was, as if, the central metaphor of their lives then. A tree which ‘grew’ guns and imparted purpose, courage and hope to these people. The Year now, 2004, Zahrah knows that the tree, (the metaphoric one at least), is no longer there. Commander Gul Ruz, her one time hero and inspiration, now lives in Kabul—a city (how could that be?) and is now a commander in the Afghan army. The horse is replaced by a car; he has a large family, two wives. Another person to figure prominently in the narrative is Commander Anwar Jekdalek, a member of the base camp she resided in during her 1983 visit. (Zahrah provides us with two coloured pictures each of these men, one taken in 1983 and the other in 2004.) She has met him only few times outside Afghanistan. Accepted lovingly as a member of their family by Anwar’s parents earlier, Zahrah notices certain wariness develop in Anwar’s attitude consequent upon his brother Arif’s murder. This time over, when she meets him, he is described by her as ‘a rather urbane, middle-aged ‘gentleman’ … graying hair, bald spot, reading glasses’. Commander Anwar Jekdalek seems to be a very important person now though officially he is ‘President of the Olympic Committee for Afghanistan and Director of Physical Education’. On reaching his office the interpreter describes her as ‘Banafsha, (who) was on Jihad, with Mr. Jekdalek’. It gives the reader’s heart a twinge to realize that Anwar is cautious of the same ‘Banafsha’ now, and as she begins to unpack her camera looking for a suitable angle, his face ‘turns a sickly kind of green’. He is visibly nervous till she puts her camera away, harried by the prospect of assassination by the erstwhile ‘jihadi’, his Scottish companion Banafsha.

Nasir’s camera, very much a part of her revisit endeavour, cannot perhaps capture as beautifully as her own mind does the anguish of the shattering of a dream. An anguish laced with denial. The Russians have moved over, but the Americans, the Pakistanis, or even the Taliban, continue to ravage the Mujahideen homeland. What do the Mujahideen stand for today? In what context do they place the American experience? In a conversation with commander Gul Ruz, he is reminded by her that if the American presence will turn out to resemble the British colonization of Afghanistan, they will drive them away like they did the British. There is fire in his voice, a spark in his eye. Perhaps a tougher question that the book raises is the issue of incompatibility between urbanization and revolutionary fire. A Mujahideen minus the earthy smell of the mountainous Afghan soil, is there a hint of emasculation? And what about the women and children? A wedding that Zahrah attends takes her completely by surprise. Kids wear nylon T-shirts with tightest possible jeans while women reveal elaborate hairdos and anything from sequined sarees, ghararas, and shararas to low-necked dresses once their chadors are flung away! Is there a single Afghani dress visible? They all dance, mostly to western or Indian film music, while rockets explode in the distance.

Zahrah Nasir’s narrative strategies turn out to be extremely suitable for the kind of enterprise the book is. Most of the book reads in present simple. A sense of immediacy, urgency, even anxiety is conveyed successfully. Paragraphs, if any, are short. Even when an event is described in the simple past, the present simple overtakes it soon enough. Added to this is the crispness (though at times uncomfortably telegraphic) of the language. As a novel which records an experience tempered with a sense of fascination and wonder, bordering on anxiety because of a sense of uncertainty, the author’s style ensures the reader’s emotional involvement with the narrative/narrator. A meeting with Commander Gul Ruz and his family, over lunch, is described as follows: Gul Ruz silently adds pieces of meat to my plate. An honour. In Tora Ara it was lumps of potato which he transferred from his plate to mine. ‘Why?’I asked then. ‘Where you come from people like potatoes I am told’. I didn’t ask now. I now know the customs. This is how a guest is treated in Afghan and similar cultures. Shortly after, when she sees him leaving, she describes Gul Ruz as a forlorn figure in a black cloth jacket with large, black cloth covered buttons. Kalashnikov in one hand, a plastic bag containing two mangoes in the other. ‘I am ashamed by his pain’.

On her way back to Bhurban, Pakistan, Zahrah Nasir’s flight has a similar timing with the flight to Moscow. The departure lounge is full of Russians. She notices that the Afghans interact with them pleasantly, something she finds herself unable to do. As the Mujahid ‘Banafsha’ melts into the Pakistani Zahrah Nasir, she realizes that the ‘never in our life does some time come twice’. The future of Afghanistan is uncertain. Kabul can never be the real Afghanistan in any case. The number of foreign troops in Afghanistan is set to rise again, to restore peace to the country as a whole. This is not Zahrah’s Afghanistan.

Baran Rehman is currently Reader in the Department of English, Jamia Millia Islamia, New Delhi. She teaches literary theory and drama, and has an active interest in translation. Women Studies and social work are her other areas of interest.