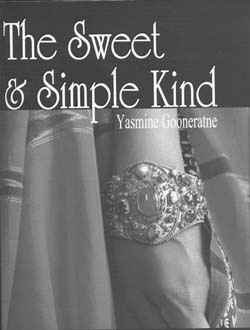 This voluminous novel brings together the literature student, teacher, critic and social thinker in Yasmine Gooneratne. Set very close to the experiences of her generation in the last years of colonialism and early dawn of the new nation called Sri Lanka, the novel unfolds the growing up of Latha from a young girl to that of a scholar with a doctoral degree from Cambridge. The growth of Latha is juxtaposed and contrasted with that of her cousin Tsunami. In fact most of the eventful happenings in the novel are to do with Tsunami—her affairs, family turmoils, psychological trauma of her mother’s decision to leave her husband, marriage with an Indian, accident at the young groom’s yard on the day of their wedding, her ambition to write her novel and her exotic settlement in a Greek island. But the protagonist is Latha. Rowland Wijesinha, father of Tsunami represents the upper class, elitist, English educated brand of people, who held official positions during the colonial rule and soon took over the politics of the newly independent Sri Lanka.

With scant respect for independent opinions on issues of culture or history, people like him have no qualms about changing colours to suit the clime. Herbert Wijesinha, father of Latha on the other hand has the quality of an observant critic.

He collects newspaper cuttings and is equipped to track the events in history. Without any interest in climbing the ladder of power, he remains strong and sure in the decisions he makes.

The mothers are much more glaringly different in their background and attitude. Helen is an artist of Indian Tamil origin with sensitivity towards her own selfhood. She tries to drown herself in the affairs of motherhood and household but finds herself miserable and low. She leaves her marital home with Mr. Goldman. It is said that she had not transgressed her marital vows and just escaped the stranglehold of marriage. She remains attached to and concerned about her children, especially to the younger daughter. Tsunami however remains in hatred of her mother despite her emotional affinity, till she gets to meet her again after many years. Some of her hidden fears as to whether she was born out of wedlock and whether she is not cut out for a faithful marriage seem quite overdone.

Soma, mother of Latha, on the other hand is educated in Sinhala, Buddhist ways. She is against very overt European ways. She is equally interested in keeping up class interests though. Quite traditional in her ways, along with her sisters agog to gossip about spicy matters, Soma represents a typical mother.

This world is peopled with many more characters, some of them very close like Tsunami’s brothers and sister and stepmother Moira and some others who cross their ways in school and university. The most interesting characters are the Warden of Sangamitta Hall and the couple Paula and Rajan. Paula was instrumental in making Latha dream of academics. She also let her generously into her life that had alternate values. The couple had defied the system and were fighting it together with idealism. In a way, they remain Latha’s role models. They are portrayed in the light of teachers who had inspired the author years ago. ‘At the age of 15 I had the good fortune to attract the interest and friendship of two wonderful teachers: Pauline Swan and her husband C.R. Hensman’, she had said in an interview. Dr. Joan Springdale, the Warden of Sangamitta Hall stands for pragmatism and all that is good in western values. A foil to her is provided by Mrs. Lobelia Raptor, the Warden of Sir James Peries Hall. The way she handles the unwarranted pregnancy of a blind girl makes her almost inhuman. Most other characters are a sample for each kind. There is a follower of Buddhist faith, daughter of a communist worker, a scholar from UK, a new staff member who is Tamil and foreign returned, a Muslim driver, a Hindu cook, a Sinhala maid, an artist given to taking the women who inspire his works, art dealers, political thinkers, cricket fans, a gay person, fashion-driven women and a Tamil family with love for Carnatic music. There are sexual violations of plantation women by rich youth who come to spend their holidays in the estates; there are astrologers and brokers of marriages; there are beauty parlours of the highest order and the long and amazing drives between Colombo and Kandy.

There is only one trip made to Jaffna by Daniel Rajaratnam and Ronald Marchmont. The hospitality of Rajaratnams and the concert are described. Tsunami attends that party with her father, a sign of good fellowship among the ruling Sinhalas and the elite Tamils. Apart from that Northern Sri Lanka does not appear in the mapping of this book. The reference to caste and class appear in fragments. They are brought in to highlight the progressive bent of mind the two girls develop. If Yasmine Goonaratne is interested in exploring how ‘the past is reflected in our present’, all the more reason for her to know how the ethnic issue of Tamils sprang up in all spheres of the new nation.

Being a Tamil-Indian with intimate knowledge and interaction with the Tamil academic world in Sri Lanka, I am aware that Peradeniya University of the period dealt with by the author produced the best of minds in Tamil studies, who hold major positions in academia the world over. I can refer to Professor Sivathambi, a legend of Tamil Studies in both Tamilnadu and Sri Lanka offhand. I am aware that Yasmine’s works are grounded on personal experiences that lend them a convincing reality. I am only troubled by the fact that an alert and engaging mind as hers has gone without noticing any of the ethnic crisis, the symptoms of which began as early as in the late thirties in the island. The only cultural marker of Tamils that is shown as having been stifled is the bindhi worn by Helen. The only word which is critiqued is ‘coolie’ while referring to the hand-woven sarees.

The novel brings together the world of literary criticism and pedagogy. Being a Jane Austen scholar, the author is able to bring out the connection between the world of Possession and the middle-class families in Sri Lanka. The avid interest shown by both the young women in the novel and the kind of sharing they have with stories is a treat to any literature student. Texts, quotes from texts and authors across the continent play a choric role in the narration, subtly intertwined with the destiny of its characters. Therefore the work offers a layered understanding of reading process. In the realm of sexuality and gender however the novel is cautious about not making any transgressions, even unwittingly. Latha, the chief protagonist is not only sweet and simple but is almost immaculate and asexual. She is restrained even in moments of intense passion. Her thoughts on gender and sexuality are quite mature though. She supports the pregnant student; she is with Tsunami whatever she does; she understands Anupam’s homosexuality; but she herself is filled with her childhood hero image of Ranil. Much later when she meets Chris, she almost thinks he is Ranil. Though the novel describes at length the deterioration of values and highhandedness of Ranil, Latha has no strong criticism against him. Only she turns down his proposal and the supporting letter of Moira by tearing away their letters. For her, body does not pose a great problem. She is of the mind. As Moira compliments, Latha ‘has been groomed well by Soma’.

Tsunami, of course, presents the other side. She is impulsive, passionate and sensual. She lands herself in trouble. Helen’s escape with Goldman is hushed up but never forgiven. The affair with Ran Menike, a poor Sinhala maid servant of Gerard Van Kuyk, another painter in the novel and his subsequent affair with Lalitha are absolved for the sake of his ‘creativity’.

It is Mannamperi who gets pregnant and is saved the trauma by Herbert. The name Mannamperi has become the most troublesome symbol of violation against women in the crisis-ridden ethnic struggle of the country. The most gruesome violation of Mannamperi, a woman leader of JVP in the seventies, was committed by the state army. I am not sure if the author intended the connection. But it does resonate for those who are aware of that history. In the novel, she is a blind girl who has an affair and unwittingly becomes pregnant.

The novel is very careful to maintain the time-tested values of marriage, family, caste, class and religion. Except Paula and Rajan, the other families toe the same traditional path. And in making Latha the spokesperson of the narrative, it subscribes to a view of life, devoid of any complications whatsoever.

Mention should be made about the use of language in the narrative. The kinship terms used in the text will be a welcome addition to English. Most of the cultural codes, either food items or names are retained. Though the text is written in English, these narrative measures give us the ambience of the Sri Lankan life. It is time that we evolve a South Asian English, capable of expressing the bi- or multilingual contexts of our everyday lives.

One more feather in the cap regarding this book is that it is published from Sri Lanka. Perera Hussein Publishing House is a young publishing house in Sri Lanka attempting to do its bit in the maddening market of publishing industry. I am sure for a well-established writer like Yasmine, this would have been a conscious decision. I am glad she chose to be published by a small publisher in Sri Lanka, rather than an established firm. The novel was shortlisted for the Crossword Award, 2007. It is important that we recognize this and hope more writers will follow suit. The politics of publishing is no less a field in the postcolonial context.