Linking the Spiritual to the Political 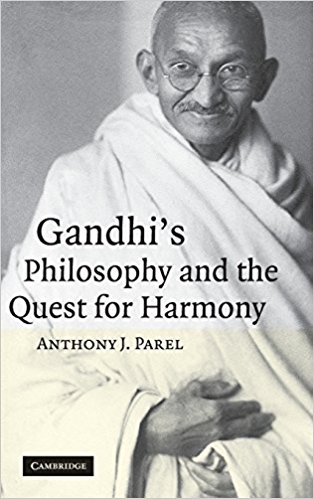 Linking the Spiritual to the Political
Rohini Mokashi Punekar
GANDHI'S PHILOSOPHY AND THE QUEST FOR HARMONY by Anthony Parel Cambridge University Press, 2010, 226 pp., 00.00
April 2010, volume 34, No 5

This earnest and thoughtful volume is invaluable, not least because it brought back to the present reviewer the presence of Professor K.J. Shah, the first philosopher who connected emerging approaches to purushartha, including his own, to Gandhijis thought and praxis. Parel himself discusses in the introduction K.J. Shahs work on Gandhi. Shah contended that the foundation of Gandhis thought was the theory of purushartha1 ; however, it was not aligned to any particular theology, but could be applicable to individuals, nations and civilizations irrespective of religious or sectarian bias. The book under review is an attempt to work out a detailed analysis of Gandhis writings in support of Shahs contention, i.e. it uses the theory of purushartha as a framework of analysis that does justice to the basic unity and coherence of Gandhis practical philosophy. In a sense it completes K.J. Shahs task even as it manages to bring out the inner dynamism and interrelationship between the different aspects of Gandhis thought. The ideas of ahimsa, swaraj, satyagraha, sarvodaya that Gandhi originated are set within the intellectual framework of purushartha.

The introductory part of Parels book lays out the context of his thesis. Etymologically the term purushartha is made up of purusha (spirit) and artha (for the sake of) and Hindu culture prescribes four legitimate aims of life or purusharthas: kama (pleasure), artha (wealth and power), dharma (ethics and religion) and moksha (salvation). Put simply, the pursuit of purushartha is what gives human activities their basic meaning and purpose. However, a fertile ground for debate in Hindu philosophic thought has been the relationship between the four aims. Historically, the ascetic strain in Buddhism, Jainism and Brahminism stressed renunciation, as a result of which there was a radical separation of moksha from the other three purushartha, especially from kama and artha. The privileging of moksha was to cost Indian civilization dearly, argued many Indian philosophers of the 20th century, leading to the separation of the spiritual from the political and the economic from the ethical. The rethinking of the theory of the purushartha in the 20th century helped locate Gandhi in the right historical and intellectual context.