Life of a Playwright: In Ten Acts 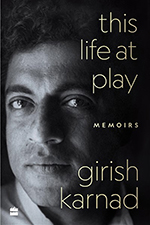 The publication of Girish Karnad’s aadatha aayushya, aptly translated as this life at play was a much-awaited event among Kannada reading public. The first two chapters published initially in a literary magazine and later serialized in a leading Kannada daily, had created tremendous expectations.  When the book finally arrived in 2011, it was a rare feast not just for its richly textured narrative, but also for its language replete with local idioms soaked in Dharwad dialect which we rarely get to see in his plays. There his language is plain and even neutral, making it difficult to locate them in any specific Kannada speaking region. In fact, Karnad’s Kannada had come in for criticism as ‘artificial’ in a literary seminar in Mysore but strangely P Lankesh, with whom Karnad had a troubled relationship (as can be seen in his chapter on Sringeri: Samskara), had come to his defence.  Taking his usual barbs at the critics, he had praised Karnad’s plays for being ‘full of life and creative energy’ capable of evoking the dramatic situation that overcame his plain use of language. He had added, ‘even when his plays are bad, his sense of theatre makes them come live on stage’ (Lankesh Patrike, May 1, 1996). Given his international fame, writing his plays in English would have been lucrative, but Karnad always chose to write in Kannada which had won him Lankesh’s admiration.

Much of the gait and rhythm of Dharwad dialect used in the Memoirs is lost in translation, but it is ably compensated by the structure of the narrative, its crisp and energetic tonality enhanced by the inimitable craft and skill of a master playwright. In a way, it reads like a play, a saga of a creative self, told in ten Acts with even a prelude and an epilogue that adds to its appeal as an artistic form.  The translation, partly by Girish Karnad and rest by Srinath Perur, ably captures the essence of the narrative and one does not even notice the difference as the two translations blend seamlessly into one smooth flow.

In the beginning itself, Karnad makes it clear that he does not want his memoir to ‘end up caressing the memory’.  The result is a highly readable reconstruction of the times, the ‘moments’ that enabled to see the world as a ‘life at play’. The generous use of dialogue and a graphic description of places and people add to this dramatic effect.  Look at these lines, for example, that bring to life the figure of Pai-master, his beloved primary school teacher:

Pai-master had a cockroach moustache on his upper lip, and hair cut so short that what little one saw seemed to cling to the skull. He wore thick ‘soda-glass’ spectacle, a dhoti that was never actually dirty but did not show signs of having been washed either, and a thick, short-sleeved shirt that was always either jet black or dark green because—the rumour went—he did not want to waste time washing it. (p. 42)

The dedication (to the doctor who by not showing up on time, becomes the cause of his very existence) is as dramatic as the opening scene of a play that sets the mood of the narrative, while the epilogue evokes a 17th century Jain text Ardhakathanaka as if to justify the abrupt ending of his memoirs with his marriage to Saraswathy, his longtime acquaintance, after saying no to an alliance from Hema Malini’s family.