A Journey into the Self and Beyond 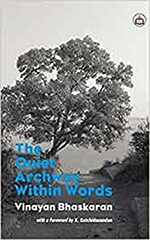 I have abandoned all the rules of the road

to find I have none I can call my own

except those I fashion

beneath this quiet archway within words.

Having perused Vinayan Bhaskaran’s previous books, such as Beyond the Blue River and The Grand Story of Ikli Chokli (Tulika Books), both children’s books, it was (pleasantly) startling to come across his debut poetry collection, The Quiet Archway within Words. The fantastical story-telling, lush hyperboles and leaps of imagination of the former two, understandably, give way to a very different voice in the latter—a voice which is by turns lonely, rebellious, sardonic, and empathetic to what it perceives to be fundamentally apathetic world. It must be remembered that such a voice risks lapsing into ranting/ complaining, rather than writing/creating poetry. However, Bhaskaran’s poems, informed by his astute observations, and crafted from carefully constructed images, become succinct, to use TS Eliot’s term, ‘objective correlatives’ of a panoply of emotions the speaker experiences and reflects upon.  Noted poet, K Satchidanandan writes in his Foreword, that ‘the general sombre mood of the poems, the striking imagery, the feeling of estrangement and the occasional dark humour are likely to remind us of the days of high modernism: but once we enter the poet’s intimate world, we easily know that all these spring from the poet’s intense personal encounters.’ The Quiet Archway…, consisting of three parts, namely, ‘Poems of Exile’, ‘Painting Pictures’, and ‘The Quiet Archway within Words’, has thirty-eight poems. In these subsections, the poet’s deep preoccupations with themes, such as struggles of writing/the poetic vocation, alienation, and family become conspicuous.

To start with, the first of these themes, which struck this reviewer was ‘the act of writing and poetry’, and the difficult position/ struggles that any artist/ poet is heir to. Poems such as ‘Room at Night’ (p. 42), ‘A Poem is’ (p. 59), ‘This poem’ (p. 67), and the title poem, ‘A Quiet Archway within Words’ (p. 71)  deeply reflect upon the act and struggles of writing, as well as the spiritual and moral solace which poetry provides. In the title poem, ‘A Quiet Archway…’, Bhaskaran refers to his deeply personal, poetic space as ‘this quiet archway  of words/ on pages’, which, he continues,

lift off the still surface of the night

as though stirred by memory

leading past the ruined doorways of faces

to a gaunt abacus of want

I had read wrong.