A Window into a Special Boy’s World 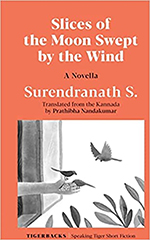 A Window into a Special Boy’s World
Deepa Bhasthi
SLICES OF THE MOON SWEPT BY THE WIND: A NOVELLA by Surendranath S. Translated from the original Kannada by Prathibha Nandakumar Speaking Tiger, 2022, 144 pp., 499.00
July 2022, volume 46, No 7

And what is more generous than a window?’ So wondered Pat Schneider in her poem, ‘The Patience of Ordinary Things’. Indeed, for a certain unnamed special boy in an unnamed town, the generosity of a window in his parents’ room that overlooks the road is his daily act of joy, his succour, even nearly the entirety of his world.  Surendranath’s Slices of the Moon Swept by the Wind, a novella translated from the Kannada by poet and writer Prathibha Nandakumar, assigns to such a boy the role of narrator and protagonist.

The very brief novella, a long short story really, is constructed like diary entries from a journal that the boy keeps. He begins by acknowledging that no one seems to understand what he says, that he talks a lot and none of what he talks is straight, which is why his teacher had told him to write whatever he thinks. The boy introduces the reader to his small house with the kitchen that he has never seen lit with sunlight, a room for his parents, a room for him and his siblings and the toilet ‘way over there in the backyard’ (p. 15). He introduces us to his family, Appa and Amma, his parents, Doddakka, his first elder sister, unmarried and who looks older than their mother, Sannakka, his second elder sister, Tangi, his baby sister and Anna, his elder brother. There is an early hint of an old family disgrace when he mentions another elder sister who he believes has died, though he cannot consult anyone at home and know for sure.

‘I believe I am sick’ (p. 20), the boy writes, though he does not know what he suffers from. All he can tell the reader is that his father takes him to Shetty doctor’s clinic a couple of times each month. The visits are always at night and Appa sometimes cries bitterly after meeting with the doctor. On the rare occasions that he has gone out during the day, Appa had covered his head with a towel and carried him, he writes. The majority of the boy’s day is spent by the window in Appa’s room from where he can see both the road and the guava tree. A thin curtain covers the window, and Appa has put a chair next to it for him. He bathes, puts on fresh clothes and sits on the chair until lunch, then naps, then the teacher comes, for going to school is not an option, not yet. ‘I don’t go out. I sit at the window and watch the road’ (p. 25).

In one of the most poignant of the diary-like passages, he says, ‘I am not like others. I know that. But I do eat like others. And sleep like them. I also cry. I play alone at home’ (p. 28). Further ahead in the same entry, he refuses to tell us what he looks like, saying instead, ‘Whatever your imagination is, I look worse than that.’ He writes that instead of an ear he has just a hole and needs special specs to read or write.