Life of a Nationalist Muslim 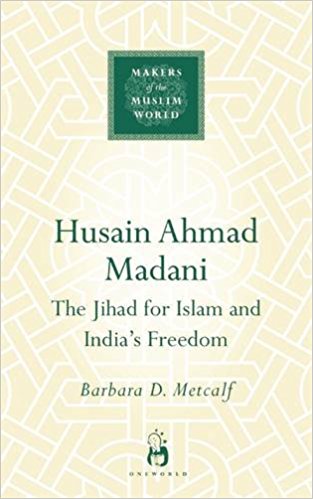 Barbara Metcalf’s work on Husain Ahmad Madani is part of a series called ‘Makers of the Muslim World’ published by Oneworld Publications and edited by Patricia Crone. The volumes in this series are biographical profiles of prominent Muslims through Islamic history who have ‘…made a significant contribution to the political, intellectual and religious landscape of the Muslim world.’ With an emphasis on easy readability so that it appeals to a wide range of readers, the series profiles a diversity of Muslims with an effort to represent prominent Muslims from the expansive geography of Islam through time.

There are five Muslims from the South Asian region who have been represented in the series. Of this, one, Amir Khusraw (by Sunil Sharma) was a poet and scholar who lived in the thirteenth and fourteenth centuries. The second person profiled is Akbar (by Andre Wink), the great Mughal monarch, who died in 1605. The remaining three are, interestingly, ulema (theologians) from north India who were active in the late nineteenth and early twentieth centuries and who were keenly aware, and familiar, with each other’s activities.