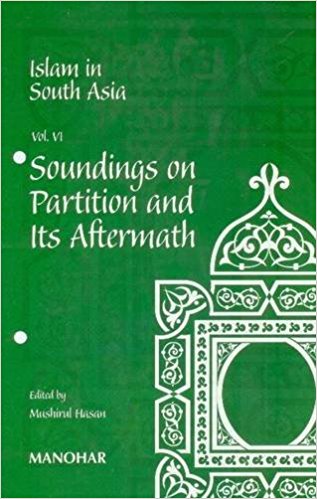 Having worked on the themes of Indian Nationalism, South Asian Islam, Muslim Communities, Partition, and related subjects for about three decades the historian Mushirul Hasan thought of bringing out a series of anthologies on Islam in South Asia which could put most of the shades of analysis pertaining to such explorations together in one place. The volume under review is sixth and last in the series. It has sixteen essays, about half of these consist essentially of excerpts taken from the memoirs (English language) of some important persons (mostly Muslims) who lived and experienced the Partition and its impact; some of them acted in those events of history either in the capacity of political activists or administrators, and recorded their observations, impressions, and analysis. The purpose of the compilation as stated by the editor is, ‘to introduce lesser known texts, explore marginalized voices, reveal the religious and secular identity of a people as reflected in the literatures about them or on them and, last but not the least, present the unity and variety of a religion that is almost universally, and mistakenly understood to be undifferentiated’ (p. 8).