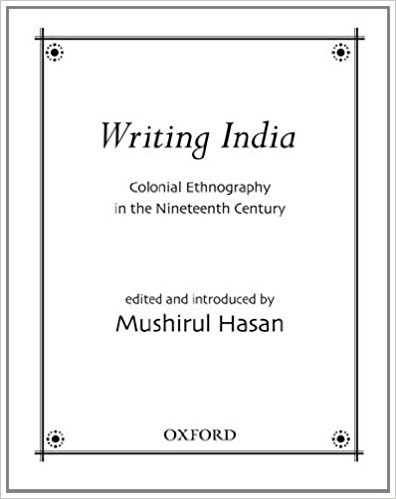 Representations of people and of the past have emerged out of diverse contexts and been put to varied uses and served various ends. Much time has passed since the colonial ethnographers constructed their understanding of people, customs, law, language, religious and caste beliefs for purposes of governance and control. Yet, their knowledge and constructions continue to not only influence our comprehension of modern India but also provide deeper meanings to both tangible and intangible cultural symbols, some being shrouded under the maze of distortions and unsecular characterizations. It is therefore no wonder that such ethnographic writings have continuously generated interest and new fields of enquiry.

As administrators, army officers, surveyors, enumerators or recruitment officers, the British established a tradition of writing about local communities, creating ‘a corpus of knowledge’ enabling ‘scholars and generalists to “discover”, “inscribe”, “imagine”, and map India’ (Introduction: p. xi). Most history students are familiar with the history and ethnology of William Crooke, W.W. Hunter, E.S. Thurston, Herbert Hope Risley, Todd and others.

This knowledge or colonial anthropology, as is well known, was potent as a tool for exclusion, inclusion as well as institutionalization of governance by the colonial rulers over the ‘natives’. This knowledge-power relationship in the Indian colonial context and its impact on the colonized mind have already been forcefully brought out by scholars such as Arjun Appadurai, Trautman, Ronald Inden and Bernard S. Cohn.

The Indian Army as it grew into a strong and centralized body also became a storehouse of information available to the colonial State about the lives and social background of Indians. Writing India: Colonial Ethnography in the Nineteenth Century, edited by Mushirul Hasan encompasses eight such descriptions of communities from the handbooks prepared by military officials between January and April 1894. These handbooks were meant to guide military recruiting policy or to provide information to officers joining for the first time a regiment composed of a particular group. The idea was that those considered loyal, trustworthy and gallant from among the different castes and classes were to be brought close to the imperial machinery. The Indian Army, comprising both British and Indian units, was meant to serve the Empire both in India as well as in Africa and Asia. Hasan succinctly comments, ‘India was a British barrack on the Oriental seas from which Britain could draw any number of troops without paying for them’ (p. xii). Many reforms were suggested following the Revolt of 1857 and for meeting the continuing exigencies abroad. Although elaborate reorganization took place at the end of First World War, the reorganization following 1857 included a reappraisal of the different ethnic groups, their character, personality and suitability for military work. As pointed out by Hasan, many shifts could be discerned from the writings that resulted. The southern India units were gradually excluded. Also excluded were the UP brahmins for having ‘ditched them (their masters) at a time when their support was most needed’. The martial races of Nepal and Punjab were included. The other favoured ones were the Pathan, Dogras, and the Jats more than the Gujars. The latter were considered ‘surly’ and ‘less attractive’ (pp. xiii-xiv).

The handbooks thus made available the physical and cultural characteristics of the communities. The information was collated from other writings, but was prepared as per the requirements of the Adjutant-General and of concern to the Army and British administration in India. For example, when Captain W.J. Newell, the District Recruiting Officer at Lucknow in 1894, writes about the customs, marriage patterns, gotra divisions and physical characteristics of the brahmans, he refers only to those ‘tribes and sub-tribes’ who served in the Army. Consequently he mainly refers to the ‘Kankubj, and the Sarwariya’. In addition, since a few Sanadhs and some Gaurs and Saraswats (in the Punjab regiment) also served, they too are included. The Saraswats are represented as being ‘less grasping and quarrelsome’ than the Gaurs who are also depicted as being a ‘more ignorant race than the Kanoujiyas’ (p. 9). A short section on the Bhuinhars shows them as being ‘intriguing, quarrelsome, and cowardly’. He also advises that although the Bhuinhars have succeeded in being enlisted in nearly every Bengal regiment ‘by passing themselves off as Rajputs’, any case of enlistment of a Rajput of similar name must be carefully ascertained to rule out the possibility of their being Bhuinhars or the ‘miscellaneous Brahman’ (pp. 10-11). Notes on brahmanical titles, and district wise distribution of brahmans in North Western Provinces and Oudh according to the Census of 1891 add body to this somewhat sketchy chapter. Similar pattern of compilation is evident in accounts of other communities. The section on Hinduism, like other sections in the volume, consists of extracts from earlier works, in this case, Sir Monier Williams’s Brahmanism and Hinduism.

Memorandum on Sikhs compiled by Captain R.T. Crowther includes input from census reports, gazetteers, and earlier works to put together ‘beliefs, customs, distribution, subdivisions of the Sikhs, and the relative military value of their various subdivisions’ (p. 65). Their martial qualities and love for war as a ‘necessary stimulus’ are described at length. Ibbetson is quoted as, ‘I know of nothing more striking than the bravery with which the Sikh fought against us, the contented cheerfulness with which he seemed to have accepted defeat, and the loyalty with which he now serves and obeys us’ (p. 84). Crowther concurs and further observes that with good pay the Sikhs are ready to go anywhere and are best as infantry soldiers, renowned for their power of marching and their courage in the face of any adversity. Also in their thoroughbred looks, martial bearing, and dignified appearance, they are above all others in India (p. 94). Crowther further analyses their military prowess according to the various castes that embraced Sikhism. He observes that while those who were earlier brahman and khatri make good soldiers, the Jats, though ‘thick headed’, were close in manliness and vigour. The latter’s innate qualities are mentioned as being disciplined, courageous and tenacious, but stubborn. Several Jat tribes such as Tarar, Gil, Virk, Pannu, Khosa, Sidhu and Randhawe are also described along with ‘classes’ that embraced Sikhism such as Labana, Saini, Mahton, Tarkhan and Arora. The Arora, according to Crowther, were imbued with ‘no soldierly qualities’ but were good as business persons.

Accounts of Punjabi and Hindustani Muhammadans, written by Captain A. Hamilton and F.G.R. Ostrehan respectively, follow. Hamilton’s ‘thick descriptions’ about the Punjabi Musalmans, are based on the Punjab Census Reports of 1881 and 1891, District Gazetteers and Settlement Reports, and Sir Lepel Griffin and Major Boyle’s writings as well as information gathered while on recruiting duty in the district. This information served the colonial objectives well as the Punjabi Musalmans after the Sikhs, made up the greatest part of the Army in the post-Mutiny period, having replaced the Hindustani Musalmans. Hamilton describes them as gallant and dependable. Ostrehan, on the other hand, focuses on Hindustani Musalmans particularly in the Delhi division, the United Provinces and Awadh, in one of the longest chapters in the volume. One of the major texts that Ostrehan has used, especially for his note on Muhammadan religious and social observances, is Hughes’s Notes on Muhammadanism. The account includes the origin and spread of Muhammadans, dwells upon the ‘collision’ and eternal ‘hostility’ between Hindus and Muslims, the ‘Hinduised’ form of Islam that is followed, and their eligibility for enlistment in the army. Those eligible included the descendants of the original invaders and immigrants of whom the Sayads were preferred in the Cavalry, and from among the converts the preference was for those who did not indulge in menial activities such as the Rajputs, Jats, Mewatis, Gujars and Shekhs.

A separate section is devoted to the ideas behind recruitment of the Garhwalis. Caution here is advocated against recruiting the fake Garhwalis —the ‘black men’, men not dressed in blanket fabric worn by the Garhwalis, and those such as the Surajbhansi clans and some Bisht clans who display pronounced caste prejudice like the brahmans (pp. 235-6). J.T. Evatt, of the 39th Garhwal Rifle regiment of the Bengal Infantry, provides details of geography, history, character, customs, habits of the military and other classes of Garhwal, the Garhwalis as soldiers, and circumstances leading to the raising of a Garhwali battalion in April 1887. Interestingly, his account does not find mention in Hasan’s Introduction. Captain K.P. Burne, on the other hand, is lauded by Hasan for providing rich images of the Dogras based on the findings of a survey driven study. Their history, the geographical basis of the term Dogra, and the transfer of their land to Maharaja Gulab Singh by the British on March 16, 1846 for a sum of Rs. 76 lakhs are described in detail by Burne. The last two chapters are on the Rajputs by W. J. Newell and the ‘Rajputana Rajputs’ by W. Prior.

The volume, in addition, includes biographical details of the authors of each section, related details from census data (some of it in a CD attached) and a terse and to the point Introduction by Hasan. As mentioned above, these writings are representations of the imperial project of classification and enumeration which facilitated the administrators to ‘particularize as well as generalize’ for purposes of governance. The construction of obedience and loyalty as innate characteristics of some groups (‘Dogra like acts’ of devotion, for example) by colonial ethnographers was to reaffirm their faith in the imperial system. How was this classification perceived by the sepoys themselves other than their being loyal to the ‘government salt’? One of the numerous questions briefly addressed by Hasan is whether these depictions were non-objective or biased and were away from ground realities? Hasan argues against it as he is of the opinion that not all such writings ruffled nationalist sentiments. He provides two reasons for this. First, the colonial discourse was never constant as priorities and roles were being defined and redefined as the British consolidated their strength. Secondly, the discourse varied between the British in Calcutta and those in Whitehall. Some were of the view, for example, about the synthesis and composite ethos among Hindus and Muslims, while others saw the two communities as irreconcilably separate. Also, the ethnology brought to light community beliefs and practices, both in light of the imperial compulsions as well as ‘detailed, learned’ writings on ‘the antiquity and richness of Indian culture and civilizations’. In fact, Hasan reiterates that the Saidian critique notwithstanding, there is much ‘to draw on the resources provided by the colonial ethnographers’ (p. xii).

Thus, when in May 2010, Mushirul Hasan found the handbooks ‘virtually trashed’ in the only cupboard in the office of the Director General, National Archives, he not only accorded them place as files in the Military Department of the Archives, but also strove to make them available to readers through this publication. To be sure, as a sourcebook, its value and appeal extends well beyond the boundaries of historical studies.

Ranjana Sheel is Associate Professor of History at the Banaras Hindu University, Varanasi.