Life and Times of a Career Diplomat 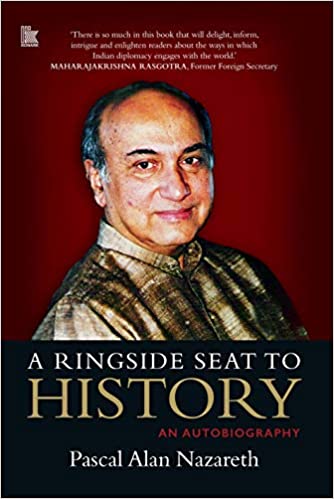 What exactly does an ambassador or a career diplomat do? Is it merely enjoying a comfortable life, mouthing high sounding ideals and engaging in protocol and immigration issues? How much scope is there for individual initiatives to play out? Reading through this autobiography, one would get a fairly good idea of life in the Indian Foreign Service (IFS) and of what difference a conscientious member can make through his efforts.

Pascal Alan Nazareth comes from a distinguished family and was selected to the IFS in 1959. Like his peers, he served across different continents—in Indian missions at Tokyo, Rangoon, Lima, London, New York, as Director General of the Indian Council for Cultural Relations (ICCR), and later as High Commissioner to Ghana and Ambassador to Egypt and Mexico. There is nothing unusual in such postings. What is rather unusual is the way he has picked up the significant experiences, both at personal and official levels, and woven them deftly into a narrative that makes delightful reading. Unlike some other retired members of his ilk, Nazareth does not unduly project himself and yet succeeds in portraying, often in understated terms, his myriad achievements while in service and thereafter. In fact, he appears so grateful to numerous people he came in contact with, both high and ordinary, and is so generous in acknowledging the help of each one of them, that the flow of his writing, at times, gets impeded.

Nazareth’s father was a judge who served in different places in southern India and was keen that his son makes it to the coveted Indian Administrative Service. His ideas were shaped by the young officers he used to meet in the districts. When Nazareth secured a high rank in the competitive examination, he was called for another interview at the Ministry of External Affairs in Delhi for selection into the IFS. [In those days, as we learn, the Foreign Secretary headed a Board, to select the candidates from amongst such high rankers.] Against his father’s wish, he appeared for the interview. ‘I was greatly surprised to learn that I had been selected…and if I decided to accept the IFS and signed its acceptance letter, I and others who did so would be taken to meet Shri Jawaharlal Nehru “not as Prime Minister but as Foreign Minister” at 5 p.m. that evening. The prospect of meeting this much-loved, world-renowned leader was so exhilarating that I decided to sign the acceptance letter despite my father’s strong opposition to the IFS.’ At that meeting they learned, when the Foreign Secretary, Subimal Dutt, informed Nehru, that HH the Dalai Lama had entered India that morning. [Nazareth would be meeting Dalai Lama a few months later while undergoing district training at Gaya!] As he admits, ‘…my “ringside seat to history” began on my very first day in the IFS.’