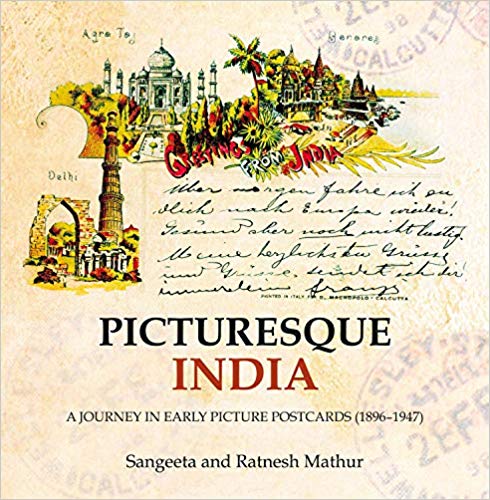 Picture postcards, i.e., cards that have pictures on them and can be sent by post, came late to India, probably only in 1896, years after their launch in Europe.  However, millions of postcards showing views of India were sold in the years that followed, especially during their Golden Era, which lasted till around 1915.  Before photography became cheap, they were the only practical way for people to convey to their near and dear ones in Britain and Europe what India and Indians looked like.  The postcards were produced by private publishers, German and Austrian to begin with, but quickly also by scores of Indian and British publishers, the most famous of them being the Raja Ravi Verma Press in Mumbai, and Tucks in London.

Happily, there was no bar to what views the publishers could put on the postcards.  As a result almost everything became grist to their mills: street scenes; monuments; maharajas; Mogul miniatures; Hindu mythology; trains; elephants; bullock carts; nautch girls; beggars; snake charmers; acrobats; ayahs; dhobis; bhishtees; well-fed Christians; starving non-Christians; the first woman cyclist in India; a fisherwoman with a figure that women would kill for; an earthquake in Kangra; plague in Bombay; the spot in Seringapatam where Tipoo Sultan fell; military barracks in Ahmednagar; a decapitated ‘fanatic’ in NWFP; a hunting cheetah on a bullock cart; Lord Curzon visiting Hyderabad; the Amir of Afghanistan visiting Agra; King Emperor George V visiting Delhi…

Luckily for us Indians today, not all the near and dear ones in Europe threw away the postcards that they received.  Many kept them, often adding to their collections postcards obtained from Picture Postcard Exchange Clubs in their towns or fellow collectors across the seas… The First World War killed the hobby (to be resurrected only in the 1960s). But, luckily again, a good number of the picture postcards survived the passage of time and even the devastation of the two World Wars. (Millions of picture postcards were turned into pulp in England during the Second World War to meet the wartime demand for paper.)