Lending a Note of Positivity 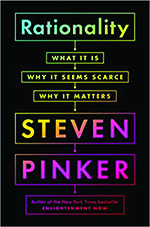 Are human beings really rational? Is rationality a culturally specific western concept? Can it be rational to be irrational? Is religion rational?

Pinker follows his other popular writings (on language, violence, the enlightenment), with a lucid account of the importance and astonishing lack of reason in today’s world. Elegantly written, with abstruse ideas clarified (the difference between Deep Learning and Artificial Intelligence, for instance), with choice quotes, anecdotes, charts, cartoons. The bibliography, as enticing as the text, supports the argument that reason is not some special preserve, but the outcome of cooperation between experts in diverse fields. Good Science is applied rationality. Facts should change opinions, not opinions facts. Yet human beings are notoriously irrational (cognitive biases abound).

Irrationality takes many forms; Pinker gives a quick introduction to the formal nature of classical logic, as well as the standard ways in which we fail to judge correctly, led astray by numerous biases (confirmation bias, myside bias etc.). For Pinker rationality is all about evidence and argument, freed from religious and political authority. Reason is a norm humans use as a tool to advance their interests; not simply deductive mathematics, it includes probabilistic reasoning, Bayesian reasoning, Game theory, all of which have been theorized and modelled in studies on the nature and limits of thinking.

But if even the San of the Kalahari Desert employ sophisticated modes of reasoning in their life as hunter gatherers, how is it that we fail to be rational? ‘A list of the ways in which we are stupid can’t explain why we are so smart enough to have discovered the laws of nature, transformed the planet, lengthened and enriched our lives, and, not least, articulated the rules of rationality, which we so often flout.’ Clearly it is the articulation of these rules which are the legacy of western science, whose universal application is the result of what Pinker calls reason. (Appeals to Ayurveda, or acupuncture will cut no ice here, because both Chinese and Indian avionics and space exploration depend on the same physics.)

In fact, it is surprising how little this book has to say about reason itself. After dismissing the circular definitions usually trotted out, Pinker settles for something as general as ‘the ability to use knowledge to attain goals,’ where knowledge is simply ‘justified true belief’ (the current defensive position held by analytic philosophy). That knowledge must have a goal, whether theoretical or practical (one that in some sense is useful), seems to smuggle pragmatics into the classical account where knowledge aimed at truth. In fact, Pinker is somewhat cautious about truth claims: reason is more the pursuit rather than the possession of truth. The emphasis on useful goals makes reason more of a skill to be taught and developed rather than a defining possession (Aristotle notwithstanding).