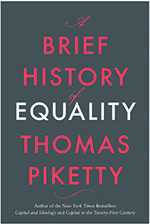 Thomas Piketty requires very little introduction. He is a Professor of Economics at the School for Advanced Studies in the Social Sciences (French: École des hautes études en sciences sociales: EHESS), Associate Chair at the Paris School of Economics and Centennial Professor of Economics in the International Inequalities Institute at the London School of Economics. He is a prolific author of books (several of which have been bestsellers) and articles. His work is often represented as being a continuation of the pioneering work of Simon Kuznets in the 1950s. Both study long term time series data. Piketty however tends to differ from Kuznets in his assessments. Kuznets had depicted a long-term reduction of income inequalities occurring on account of the continuous reallocation of the labour force from low productivity sectors like agriculture to higher productivity sectors like industry. According to Piketty, the tendency observed by Kuznets in the early 1950s was not necessarily a product of deep economic forces (e.g., sectoral spill over or the effects of technological progress, etc.) but because real estate values, rather than wage inequalities, decreased, and they did so for reasons that were not specifically economic (for example, the creation of income tax).

Piketty’s first research project High Incomes in France in the 20th Century, (Grasset, 2001), was on high incomes in France, based on a survey of statistical series covering the entire 20th century, built on data from the fiscal services (particularly income tax declarations).  He attained global fame with his best-selling Capital in the Twenty-First Century (2013), which continued the above work to focus on wealth and income inequality in Europe and the US since the 18th century. The book argued that the rate of capital return in developed countries is persistently greater than the rate of economic growth, and that this would cause wealth inequality to increase in the future. Piketty proposed improving the education systems arguing that diffusion of knowledge, skills, and ideas of productivity would act as main mechanisms that would lower inequality.

In May 2014, he ran into controversy when the Financial Times, London, published the results of an investigation into his data. The British newspaper claimed that there were discrepancies between Piketty’s data and official sources, and it charged that in some cases Piketty had modified the data from the original sources (some of the data appeared to have been constructed or cherry-picked) and, more importantly, when the errors were corrected, the data did not support his conclusions. He wrote a long response in which he defended his book, but conceded that ‘available data sources on wealth inequality are much less systematic than what we have for income inequality.’