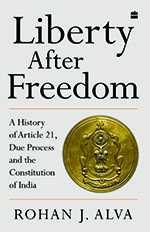 Intellectual Beginnings of a Paramount Fundamental Right
Abhik Majumdar
LIBERTY AFTER FREEDOM: A HISTORY OF ARTICLE 21, DUE PROCESS AND THE CONSTITUTION OF INDIA by Rohan J. Alva HarperCollins Publishers, 2022, 312 pp., 599.00
June 2022, volume 46, No 6

Indian legal scholarship is going through an exciting phase. Several books have emerged in the past few years which successfully combine meticulous academic research with a lucid, articulate style of presentation accessible to most laypersons. A surprisingly large proportion has been authored not by academics but practising advocates: Gautam Bhatia’s Offend, Shock, or Disturb (2016) and Abhinav Chandrachud’s Republic of Rhetoric (2017) come readily to mind. Rohan Alva’s Liberty After Freedom aspires to this genre. Alva is a Supreme Court advocate and an LLM from Harvard. He has chosen to work on a most singular topic, namely, the narrative of due process within the constitution-making process. At first sight this appears to be a narrow remit: much of the book is devoted to tracing a few phrases such as ‘due process’, ‘personal liberty’, and ‘procedure established by law’, and how they were situated within constitutional draft frameworks in the three years from 1946, when the Constituent Assembly first met, to 1949, when the drafting process concluded. However, a closer look indicates that the issue is significantly more layered and nuanced than a cursory overview suggests. It will not be an exaggeration to call it a microcosmic representation of the most fundamental issues within constitution-framing generally, and also the more prominent intellectual and polemical standpoints adopted by the drafters.

Surely a major reason for this lies in what the term ‘due process’ entails. It is generally associated not with enumerated constitutionally guaranteed rights (such as the Indian Fundamental Rights or the US Bill of Rights), but their curtailing or narrowing down. In broad terms, it specifies that such rights may be curtailed only in a just, fair, and reasonable manner. This may appear non-controversially desirable, since it enhances courts’ review powers over legislation. However, due-process guarantees have often been perceived as impediments to statehood. Instances include land reforms thwarted by robust constructions of the right to property; preventive detention, summary arrest and other state security measures challenged on the basis of personal liberty. It is against this backdrop that we must perceive the due-process narrative within the constitution-drafting process.

The book is divided into eight main chapters, each addressing a specific phase of the discourse.  In the first, entitled ‘Due Process at its Zenith’, the narrative covers the phase from the commencement of the Assembly till the summer of 1947 when the Assembly voted strongly in favour of due-process protections. In this phase the basic modalities of due process were determined. It was characterized by a broad consensus prevailing that the right to life and liberty should be protected by due-process clauses. Exceptions were made for property rights so as not to impede land reforms, while the need to safeguard against ills like prolonged detention was reaffirmed. A central theme of the book relates to how from this point on due process guarantees were progressively whittled away. Conventional accounts attribute this to Sir BN Rau, in his role of constitutional advisor, acting on the advice of Justice Frankfurter of the US Supreme Court. In the second chapter the author subjects this to detailed scrutiny, and makes out a strong case why the conventional narrative is questionable (pp. 78-79). He also claims that Rau was not inimical to the due-process clause—he was acutely aware that personal liberty provisions not coupled with adequate judicial review powers may reduce to empty ‘moral precepts’—and that his objective was to balance its mandates with the demands of statehood (pp. 66-68). Moreover, Clause 16 of Rau’s draft, which dealt with life and liberty, did retain the phrase ‘due process of law’. To my mind this is the most interesting part of the book.