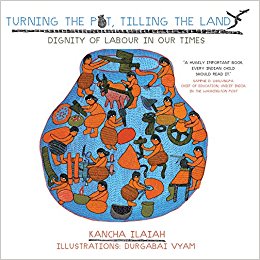 Learning Through Toil
Radhika Menon
TURNING THE POT, TILLING THE SOIL: DIGNITY OF LABOUR IN OUR TIMES by Kancha Ilaiah Navayana, 2008, 108 pp., 150
January 2008, volume 32, No XXXII

Reading through *Turning the Pot, Tilling the Soil *my mind raced back several winters. I had landed up at a tribal farmer’s house in western Maharashtra, accompanied by a group of Delhi school students who were there for a rural exposure camp. The excited teenagers from the city, wanted to “Do Something” and the farmer permitted the group to pick cotton from his plot of land. An hour in the sun however left the “tireless” teenagers tanned, ragged, bruised and dead-beat with a truly humbling but enlightening result. Sixteen enthusiastic adolescent hours had led to the collection of less than a kilo of cotton, which would have earned Rs3.50 between everyone! Not enough for our tea, plus the damages amounted to several times more—the plants were badly bruised by inept picking and wisps of cotton listlessly hung on the cleared stalks. Farmer suicides was still not news then, but when the small-landholder spoke next, the 16-year-olds heard with dropped jaws the effort involved in “simple” agricultural operations and the miserable wages it offered.

The learning potential lying hidden in every act of labour has been deliberated upon at length from Frederick Engels to John Dewey, M.K. Gandhi to Paulo Freire. Though the perspectives have varied, the endless possibilities of mental development as a factor of physical interaction with the world has not been denied. It is this, which makes educationists fascinated with the subject of labour. However this interest has rarely found a translation into practise. Partly it has been policy but it also has to do with existing structural stratifications that spreads its roots to the past and gains nourishment from our neo-liberal times.