Learning from a Crisis 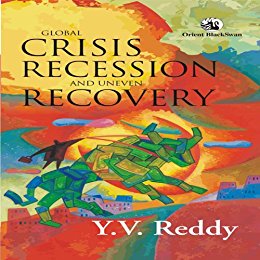 The Great Recession, which began with the financial crisis of 2007-08, though partially addressed, is still with us. Yet the expectation it generated, that given its severity it would trigger the implementation of measures aimed at reining in finance and pre-empting similar crises in the future, remains largely unrealized. This is substantially because many involved in debating the forms that new regulation should take have stakes in the financial system. The debate over regulation has become a way of ensuring that final outcomes do not harm their interests, rather than a means to working out a necessary and feasible system of regulation based on the experience leading up to and during the recession. Given that context, Yaga Venugopal Reddy, India’s Central Bank Governor during the period when the events that led up to the crisis unfolded, and subsequently a leading commentator on the crisis and its implications for the future of finance, is in a unique position. He was and is, of course, an eminent economist.

He also headed a central bank in a country that was located in a region (Asia) that was less affected by the crisis; that had fortunately not as yet proceeded down the road to financial deregulation to the extent that had happened in many developed countries; and that is seen as having been more prudent in the management of its financial system that remained dominated by banking. Based on his speeches, statements, writing and action he personally has been identified as an individual who exercised considerable caution, emphasized balance when regulating the financial system and implementing monetary and exchange rate policy.

Given these circumstances he would be one among the policy makers with some influence on the direction the post-crisis debate should take, who can be seen as an informed, experienced and relatively disinterested observer. His speeches and writings on the crisis have therefore been followed with considerable interest not just in India but across Asia and the rest of the world. This book, the second of the volumes elaborating his views on the subject, is therefore more than a welcome addition to the large literature on the crisis that has been issued over the last few years.

The book includes a set of lucid and extremely insightful essays that began life as lectures delivered at different fora on different aspects of the crisis and the lessons that can be drawn from it. Despite the author’s caution and quest for balance when arriving at conclusions or making recommendations, there are a set of relatively clear indications of the direction he thinks policy should take and the reasons for the same. Since the book includes 27 essays spread over 410 pages that are dense with information and analysis, it is impossible to do justice to it in a short review. So in what follows the attempt is to draw attention to certain noteworthy features of the essays and the book as well as to some of the conclusions that the author arrives at based on his special knowledge and experience.

The focus of the book is not the crisis per se, but the policy imperatives it has given rise to and the directions for policy that the run up to the crisis and its nature point to. On occasion the book goes further, probing issues such as the need for capital controls that are of particular relevance to developing countries like India. Its dedicated attention to these related issues and the fact that this is a book of essays prepared largely as stand-alone lectures make a degree of repetition inevitable. But a striking feature is that this element of repetition does not jar because each essay has a different focus. In the event, the repetition serves to clarify and strengthen arguments as they occur in alternative contexts.

Regarding the crisis itself, the perspective of the author is that it was the consequence of ‘synchronized and extensive excesses’, implying thereby that it originated in multiple causes. In his view, the proliferation of the financial sector did not improve growth as predicted, though it helped the sector corner ‘a lion’s share of the gains while spreading the risks to other agents.’ The need for multiple transactions to expand financial profits meant that the practice of doing business with a disproportionately high volume of borrowed money became widespread. Yet, the regulators bought into the idea that the costs of regulation were high relative to benefits and that, therefore, self-regulation (or reduced regulation) was more efficient. What is more, central bankers, especially in the developed countries, committed errors such as infusing excess liquidity at very low interest rates and the remaining concerned only with inflation in the prices of goods and services, and not in those of assets, especially financial assets and real estate.

What accounts for these and other factors that proliferated risk and located them in the hands of those who did not understand them in full? There are of course many well-discussed sources of the crisis including the deregulation unleashed by an ‘ideological preference for unfettered markets’. But Reddy points to more fundamental and less emphasized causes. Principal among these was a loss in many developed countries of competitiveness in agriculture, manufacturing and services of various kinds, and the retention of competitiveness in the financial sector. This privileged the financial sector, garnered political support for it, strengthened those in the US and UK who wanted policies to ensure that these countries remained the world’s leading financial centres, and encouraged a ‘race to the bottom’ in financial deregulation to prevent the migration of finance indulging in regulatory arbitrage. Other countries imitated their model.

The difficulty, according to the author, is that despite being ‘aware of the build up of excessive risks’ and despite their ‘fears and apprehensions’ central banks and regulators bought into the idea that financial markets would themselves ensure a smooth correction of the mispricing of risks. This was, according to Reddy, indicative of regulatory capture of a comprehensive kind, involving not just the capture of the regulator by the regulated as a result of asymmetric information access, but because of the overwhelming influence of a financial sector that had grown far bigger and far more profitable than the non-financial sector over the media, economic analysts and policy makers. Finance set the terms of the debate on growth, economic policy and regulation, and became the judge of central bank performance rather than the object of central bank scrutiny.

However, Reddy is optimistic that the depth and severity of the crisis that ensued would trigger ‘rebalancing’ on many fronts. It would change the relative importance to be given to markets and the state in the world of finance and the consequent scope and intensity of regulation. It would shift the relative emphasis to be given to the real and financial sectors. It would lead to a rethink of the degree to which countries, especially developing countries should integrate globally through trade and financial flows. It would increase the importance of national authorities as opposed to global institutions in designing the structure of financial markets and the frameworks to regulate them.

“Regarding the crisis itself, the perspective of the author is that it was the consequence of ‘synchronized and extensive excesses’, implying thereby that it originated in multiple causes. In his view, the proliferation of the financial sector did not improve growth as predicted, though it helped the sector corner ‘a lion’s share of the gains while spreading the risks to other agents.'”
More importantly, in Reddy’s view, there is likely to be a shift in the geopolitical and economic balance from America to Asia, given the better performance of central banks, regulators and financial institutions in the region. This reduced the intensity of the crisis in the region and enhanced the speed of recovery from the Great Recession. But this does not mean that countries in Asia need not learn from the crisis, since they too had moved to differing degrees in the direction of replicating the financial structures and regulatory regimes characteristic of the now-discredited Anglo-Saxon model. They, therefore, need to adopt corrective action mid-course. In India too, the author argues, the government would do well to adopt a ‘nuanced response’ to the now ‘dated suggestions’ of past committees on financial sector reforms, and focus more on issues such as ensuring financial stability, treating retail banking as a public utility and realizing a greater degree of financial inclusion.

These wise suggestions of an astute and inspired erstwhile central banker need to be taken more than seriously, and the deceptively simple essays in which they are embedded need to be read carefully by all those looking to strengthen India’s financial sector and its economy. Hopefully at least a part of Reddy’s optimism that, post-crisis, the world will change for the better, would turn out to be warranted and his reading of recent experience and his views would influence such change.