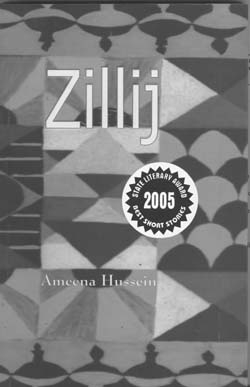 Ameena Hussein’s collection of short stories Zillij is an interest ing read that takes up disturbing issues without unduly disturb ing the reader’s mind over the said issues. It lives up to its name, for Zillij is a traditional art of creating a mosaic design using hand-cut tiles. Such a mosaic involves considerable intricacy, labour and artistry but you would merely applaud its brilliance and walk away over a pavement whose potholes would agitate you and disturb you or even energize you into action. And the Zillij pattern would turn into a fond memory splashed with vigour, brilliance and majesty. Hussein focuses more on her craft than on the causes she chooses to write about—identity, ethnic subjectivity, impact of terror on ordinary subjects, hardships of life as an immigrant, the Sinhala dream of making it big in the U.S., national history, folklore, fantasy, love, death—the canvas is immense but remains kaleidoscopic in its effect—colourful, varied, limited and fast-changing (or is it fading?).

Hussein’s easy command over the prose-idiom, her firm control over her ‘craft’, her restrained lyricism and a fine balance of humor that alters between wry, sardonic and the tender make this collection a promising treat. A more careful grouping of stories would have helped a better concentration of interest rather than the diffusive, panoramic and at times mutually contrary strands in the present effort. For instance, the angst of the white American girl trying hard to find cultural acceptance in Sri Lanka mocks at the trauma of a Jayanta (in another story) who migrates to America illegally to escape the stifling dead-alleys of Sri Lanka only to struggle with poverty and a soul wrenching job in the land of his dreams.

The ethnic conflict in Sri Lanka where quotidian life is torn asunder by bombs, assassinations and loss of innocent lives finds its imprint in many of the stories. Fantasy, legends and imagination hold sway in some others. Hussein excels as a writer in both the categories. But she needs to choose her area of focus so that she can leave the breathtaking beauty of a zillij behind and labour over carving a single rock to perfection.

Wickremesekera’s novel Distant Warriors depicts the inherent friction, suspicion and combativeness between Sinhala and Sri Lankan Tamil communities settled in Australia. A fund-raiser organized in Melbourne in support of Tamils in the riot torn mother country turns violent and results in the death of an innocent Sinhala youth who had been manipulated to join the protesting Sinhalese against the fundraiser sponsored by the Tamils. The protest is the brainchild of a scheming, megalomaniac, Sinhala lawyer who shoots off emails spouting empty rhetoric on ‘Sinhala’ glory, whips up a hollow frenzy amongst a motley group, pushes the young orphan boy Priyantha to the forefront and sneaks out of the cacophonous protest at the moment of reckoning. The old lawyer, Seniviratne emerges pretty menacing—a sarcastic, nagging, hypocritical, manipulative control freak who leaves the reader in despair over human nature.

The Sri Lankan Tamils in Melbourne emerge as bumbling fools and as prosperous professionals of Australia who wallow in sentimental patriotism. Their nostalgia for their motherland appears loud and ludicrous. They vie with each other to offer hospitality to the visiting priest, Father Anton Balasubramaniyan, an associate of their idol Prabhakaran. They try to impress upon him the Australian Sri Lankan Tamils’ eagerness to contribute to the Tamil freedom struggle, but of course, only in monetary terms. They display their loyalty to the cause of Eelam in their adherence to strict Tamil cuisine at their meetings and perhaps to nothing more. Sample this: ‘The crowd cheered again. To them it did not matter whether Father Anton’s logic was simplistic or that Eelam was a greater reality due to greater determination in the Tiger cadres smacked of rhetoric rather than reason. All they wanted to know was that the struggle was going well, and that victory was within reach. Father Anton sensed this correctly and gave them what they wanted’ (p. 97). He tells them a few tales narrating the harshness of the war, a few case-histories of suffering and heroic defiance which expectedly provoke a hollow, patriotic rhetoric in the audience and a general applause, ‘splendid speech Father, splendid’.

In this novel, the Tamil struggle for Eelam is reduced to speeches, discussions, strategies for fund-raising and counter-strategies for subverting such fundraising. The Sinhalese emerge as bumbling, menacing fools and the Tamils emerge as bumbling, ludicrous fools. Rajan, a Tamil youth and Priyantha, a Sinhala youth alternate between skepticism and aggression, doubt and valour, bathos and pathos. What is Wickremesekera doing in the novel (and to Eelam or Sri Lanka, for that matter?). He is content to remain comfortably cocooned in the outsider-insider matrix, walking (rather trying pathetically to walk) the tightrope of displaying concern for the issues (should have been lives, in fact) back home and its non-relevance to expatriates in the first world. Sri Lanka haunts both the groups but only as a distant, emotionally stirring nostalgia but utterly disconnected to their pragmatic present.

Operating within an either/or paradigm, the novelist and his characters are unable to negotiate a meaningful traffic between the two worlds—the horrendous but distant world of war-ravaged homeland and the prosperous, professionally competent, pragmatic land of their adopted country. The Australians remain as insular as possible as the ‘crowd’ who show no sympathy or understanding of the friction between the two communities but ask disdainfully, ‘why don’t you go back to wherever you came from and kill each other?’ (p. 217).

Wickremesekera’s ironic humour ultimately stands blunted for it is utterly indiscriminating. The non-resident Sri Lankan writer’s nostalgic yet dismissive perspective of a Sri Lanka in smouldering embers fails to implicate the self while subjecting his fellow expatriates to ironic scrutiny. Fiction writers writing on Sri Lanka in English have a lot to learn from their Sri Lankan Tamil counterparts whose fiction and travelogues are far more honest, self-reflexive, stimulating and well-crafted works. The extracts from the 6th century bc Chinese text, The Art of War by Sun Tsu that dots every chapter is chillingly appropriate to this narrative. In a way, this appropriateness robs the novel of a historical dynamism and renders the Sri Lankan question in a non-Sri Lankan space a tame, pre-determined, foreclosed one.