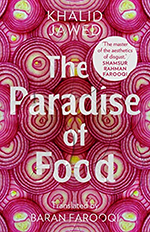 Khalid Jawed: A Cartographer of Human Existence
Faizan Moquim
THE PARADISE OF FOOD by Khalid Jawed. Translated from the original Urdu by Baran Farooqi Juggernaut Books, 2022, 402 pp., 799.00
July 2022, volume 46, No 7

What is the relation of novel with human existence? Milan Kundera in The Art of the Novel says that ‘A novel examines not reality but existence. And existence is not what has occurred, existence is the realm of human possibilities, everything that man can become, everything he’s capable of. Novelists draw up the map of existence by discovering this or that human possibility.’ Take any work of Khalid Jawed, what one readily encounters is an acute focus on the exploration of characters’ inner life, their experience of being human and The Paradise of Food is no exception in this regard. His narrative subtly infuses philosophical reflection with the culturally-rooted, concrete experience of characters. Khalid Jawed’s fiction is a cartography of human existence par excellence.

Spread over three decades, Jawed’s corpus of creative writing is increasingly cementing its distinguished place in the larger canvas of world literature. His robust experiment with ways of storytelling and subject matter has already carved a space within the tradition of Urdu fiction, where his starkly unconventional, at times counter-tradition, narrative aesthetic catapults him in a way distinct from writers like Qurratulain Hyder, Intizar Hussain, Surendra Prakash, Naiyer Masud, Shamsur Rahman Faruqi, and Syed Mohammad Ashraf. Having established himself as a short-story writer, Jawed has so far penned three novels. The much-awaited translation of his second novel, Nematkhana (2014), is now finally out for readers in English. Given the challenges of translating Jawed’s ‘crab-like prose’, the English translation is praiseworthy. Despite the resistance, it captures the poetic rhythm and idiomatic turn of the source text and also succeeds in conveying the feel of the narrative, for the drift of the narrative is symptomatic of the drift of the hyperconscious protagonist’s mind. In spite of being creative, the translation at some points steers away from the contextual essence of the original, indicating the problems of mediation that lie in translating from one language to another. Overall, Farooqi’s eloquent rendition does justice to Jawed’s sinuous prose.

The choice of the title, The Paradise of Food for the originally titled Nematkhana is tactful, for it brings out the centrality of the motif of food as well as ironically underscores the lack of paradise in the life of the protagonist. In addition, the fine decision of the translator to not translate words like ‘chulha’, ‘chapattis’, ‘bindiya’, and ‘dupatta’ among others lends a subtle culturally specific texture to the translation.

Divided into five sections and largely written in the first-person retrospective mode, the plot is straightforward: Hafeezuddin Babar, nicknamed Guddu Miyan, in his old age, that is around 68 years, begins to recollect his past life with a view to make a petition against himself. Trained as a lawyer, he wants to file the petition in a court of law to seek punishment/justice for the two homicides he committed in childhood.