Glimpses into a Past 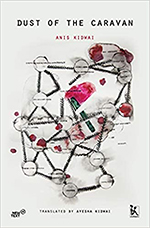 Glimpses into a Past
GJV Prasad
DUST OF THE CARAVAN by Anis Kidwai. Translated from the original Urdu by Ayesha Kidwai Zubaan with New Text, 2021, 239 pp., 595.00
Free Review of the Week

Ayesha Kidwai has already given us in English translation Anis Kidwai’s account of what happened immediately after Independence of India and the Partition—Azadi Ki Chhaon Mein (1974). Called In Freedom’s Shade (2011) in English translation, it not only marked Ayesha Kidwai’s debut as an impressive translator (she was already well-known as a brilliant scholar), it also ensured that her grandmother Anis Kidwai’s name and work would be known again to the world at large. This was work whose time had come; we needed to engage with this account by a woman activist, one who had lost her husband to the mindless violence that followed India’s Partition, one who actually threw herself into activism as a result of this tragedy.

Dust of the Caravan is its companion volume, one that will motivate a reader who hasn’t seen the earlier work to buy and read it as well (a strong recommendation from this reviewer!). The new work is a collection/selection of Anis Kidwai’s works—her unfinished autobiography (Ghubaar-e-Karwaan in Urdu), extracts from In Freedom’s Shade, and two essays by Anis Kidwai on Saifuddin Kitchlew and Mridula Sarabhai, and a short fantasy ‘The Search for a Wife’ modelled on Rokeya Sakhawat Hossain’s Sultana’s Dream. All this is framed by an Introduction that sets the stage and directs our reading, and Notes that fill in the gaps in our knowledge so that we engage with Anis Kidwai’s writings on a firmer footing.

Anis Kidwai’s autobiography is interesting first in a way that most grandmothers’ retelling of their lives is, giving us glimpses into a past we can only imagine (or perhaps not even imagine). We can also see how much the younger family must have enjoyed reading/listening to bygone events and insights into characters whom they knew or had heard of. So, even if the impulse is personal, the translator’s work allows us to think about the past, to flesh it with our family accounts even if we belong to a different region and community. While the Kidwais were certainly privileged, they were not so rich as to make us feel like commoners reading about the rich and the famous—well, famous perhaps, at least some of them! If it had been written by one of the men, it could have been a picture from above,  but since it is written by a woman who had to struggle for a place in the sun (out of the zenana), who observes closely all the people she comes in contact with and values the relationship with them, this is a nuanced picture, one that allows us to read it with a certain fellow-feeling, a certain admiration for her. She is intensely aware of the role of caste and class, of the changes sweeping through the world, of the inequity and inequality that rule their lives, and of how the patriarchal world governed and policed the life of the women, circumscribing their movements to the extent possible.

The autobiography begins with the arrival of a ‘Christian lady doctor’ in 1906 to oversee the birth of Anis. This cataclysmic event (the arrival of the doctor in Awadh, not the arrival of baby Anis) heralds the changes that were to sweep the Indian subcontinent in the twentieth century.

Anis, with a deft writerly touch, marks herself as destiny’s child, one who will see many major changes in the land, some of them exhilarating but many unfortunate and tragic. She who always wanted to be part of the life outside the house, the political life of the nation in the making is thrown into her work in the tragic circumstances that we have already mentioned.

Anis Kidwai sketches in the history of the Kidwais and Awadh in deft strokes to bring us to her contemporary times swiftly. The history and the story of the entangled lives of the Hindus and Muslims leads us to see how the Kidwais and others overcame divisions within Islam and between Islam and Hinduism—very real divisions that did not go away as we realize year after year. We see branches of the family willing to celebrate all festivals, a family in close contact with all classes. We see the ills of feudalism as well as how humane landlords negotiated it. In fact, this is true of how the Kidwai men work with patriarchy as well—playing by some of the rules but yet trying to do their best by the women in the family and outside, by opening schools for girls, by ensuring education within the zenana but the education was mostly rudimentary and even religious instruction was basic for they could not see any greater role for women than running a home. In this, they were not too different from others. As Anis points out, it is only when the men take part in the freedom movement and are jailed that they realized the role that women can play outside the home. It was still an uphill task for women but they overcame the resistance bit by bit. This is a story of a Congress family, one that believed in Gandhian secularism, in working for the uplift of all. However, as Anis points out in the last chapter of the incomplete autobiography (how one wishes that she had been granted the time to complete it!), with an evident self-reflexivity, that the women who tried to make a difference in our political and cultural life were from the upper-class and ‘these women activists exhibited a certain lack of attention to the matter of untouchability and pollution’ (p. 132).

This is thus an autobiography of an activist as a young girl. We see the beginnings of  the trajectory her life would take, we get a sense of how porous the zenana could be, how knowledge could circulate, even if the threshold could not be crossed by the women. We  get some lovely portraits of members of the family as well as visitors, we see how the family gets entangled in nationalist politics even as it declines in terms of its wealth. The autobiography ends when the writer is finally out in the world, going around Delhi for the first time. This journey that ends this book with a sense of exhilaration will be repeated, but tragically, when she has to go around Delhi after Partition, to try and stop the communal frenzy that took over the subcontinent, something she would talk about in her other book, extracts from which are available in this collection.

Anis Kidwai’s essays and her short story that are made available here are eye-openers. If you didn’t know about Saifuddin Kitchlew (and is that the fate of our Muslim nationalists who didn’t stay in positions of power later?), this is a must-read. The essay on Mridula Sarabhai is about another person who has faded from public memory, one who was vilified as anti-national, thrown out of the Party that was her life, and imprisoned for her defence of Sheikh Abdullah. Anis ends her essay on Mridula Sarabhai saying that ‘I wish I was a traitor just like her, who could save this nation from the deshbhakti of so many self-proclaimed patriots’ (p. 181).

Ayesha Kidwai has made her own interventions in this book, not only in terms of her introduction and her notes, but also in interpolating other essays by Anis Kidwai, principally Chapter 13 which is on Chaudhari Mohammad Ali Rudaulvi—an interesting character sketch, which critiques Rudaulvi gently and humorously. Ayesha’s translation and her editorial interventions including the selection that constitute this volume give us a holistic picture of Anis Kidwai and, like all good books, this one leaves us wanting more.

I must end by saying that this work is not only a granddaughter’s homage to her grandmother; it is an activist scholar’s resurrection of her activist grandmother, one from whom she has inherited her keen observation and humour—qualities we all need in these times.