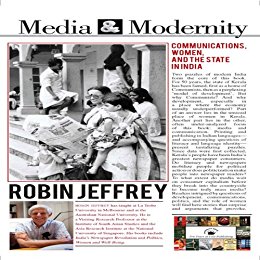 Media and Modernity is primarily about Kerala, its politics and its women and then about media and communication in Kerala. It is a book of previously published essays in which Robin Jeffrey explores his fascination with Kerala’s communism, its matriliny, its literacy, and its women. Intertwined with this is his research interest in the role of newspapers, and his pet theories about them. While neither the title nor subtitle indicate that it is a book of essays about Kerala, the volume has an unusual cover design which puts everything on the front cover: cover picture, title, blurb, author picture, author bio, and a little promo for the publisher’s ten years as well. If you read the blurb under the book title you know it is about Kerala, its communism, its women, its publishing. The first six essays are focussed on matriliny, communism, and how women use their literacy in Kerala, There is plenty of interesting historical material on the many strands that came together to influence Kerala’s women, their literacy and their newspaper reading.

In the latter half of the book there is a similar historical exploration of the conditions in which first the media and then the mass media took hold in the state. While this constitutes a welcome departure from the narrowness with which media is often treated as a subject, there is less cohesion between the two themes of Kerala and media than there might have been had Jeffrey set out to write a composite book on media and modernity with the state of Kerala as the canvas.