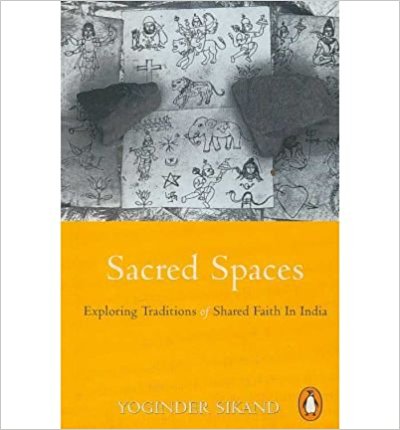 In the face of state instituted religious violence, the language of hate spewing across the country and the casual acceptance of this in ordinary lives, it is difficult not to stress the significance of this book, its sanity and its timeliness. While there is hardly any aspect of the political, economic, social or cultural life in India that is not stained by considerations of religion and sect, or the violence generating thereof, this is a fact that is known, sincerely bemoaned and endlessly circulated in academic circles of a certain colour; how much sympathy it receives amongst persuasions of other kinds is anybody’s guess. It is to be hoped therefore, that the book finds favour on account of its many charms, not the least of which is a laconic sense of the absurd, or that its appeal may lie in its first hand description of many shrines not easily accessible to the religiously inclined, and so make its impact indirectly. The book is a focused yarn; it is also a travelogue; an ethnographic account of various cults and shrines outside the mainstream; a limited history of sorts. Beginning with the Ayyappa shrine in Kerala, Yoginder Sikand takes the reader on a fascinating journey to little known places of worship that have nevertheless infused, historically, a culture of mutual respect, even inspiration, between two or more religions.

We go with the author through the southern states of Tamil Nadu, Karnataka, Andhra Pradesh and thus upwards to the north and the west, through changing landscape, weather, language, cuisine and the physical features of the humble people who throng these shared spaces. A few shrines retain their shared spiritual praxis: the devotees of Ayyappa who have traditionally worshipped his Muslim army chief, Waver, so that the shrines of both these legendary figures draw equally Muslims and Hindus; the dargah of a sufi at Bidar which is sacred to Muslims and Lingayats; the temple-dargah of Shishunala Sharif  (this is a small whitewashed affair made of the graves of the saint-poet Shishunala and his parents, but the votive flowers, earthen lamps are obvious Hindu indicators, as are the Hindu names of the singers of his songs) in the impoverished countryside near Dharwad; the shrine to Our Lady of Good Health in Vailankanni, which is Christian in liturgy and worship, but is sacred to the non-christians, so that the place has acquired the colours and feel of a little temple town. A few others have mislaid their shared identity, such as the Elamma temple of Souditti, where the goddess and her temple have been taken over by the upper castes, and history has been revised to show how she is in fact a Puranic figure, a form of Shakti; the sufi Pir, and the dargah which once commemorated him on an adjoining hillock, and the association between the two are all but forgotten except by a group of banjara women.

In medieval India the wandering sufi saints taught the message of love and oneness; some were missionaries who converted the lower castes and dalits to Islam, most others were content only to offer spiritual support. Their dargahs attracted huge numbers of people to whom this was the only medium for worship; some Sufis were also seen as incarnations of gods in the obligingly vast Hindu pantheon. Known as Dattatreya or Dada Pir, the shrine of the Sri Guru Dattatreyor Baba Budhan Dargah on the highest hill top of Karnataka has for centuries been a pilgrimage center for Hindus and Muslims; both Hyder Ali, as his son Tipu Sultan, and the Hindu Wodeyars, rulers of the Mysore kingdom worshipped here and conferred on the sajjada nashin, the administrator of the dargah, certain privileges and honours. Since the 1980’s, however, the dargah has been rocked by ugly conflict: the VHP has decided to ‘liberate’ the shrine from the Muslims. The Sai Baba of Shirdi, one of the most widely revered Indian saints of recent times, with a following that transcends barriers of caste and community, has an obvious Muslim/Sufi background, argues Sikand. As with other cults, Sikand presents contesting histories: the most recent invention is to give the Baba an orthodox Brahmin lineage, an outcome of the marked Brahminization of the Sai Baba tradition.

One of the most intriguing figures in the book is the Imam Mahdi, the Buddh avatar of Panna in Madhya Pradesh, who was claimed by the Hindus and Muslims as their own, along with a third group, the Pranamis, named after him, and who preached an ethical monotheism attempting to bring people of different faiths together in worship of the one formless God. Also known as Prannathji, his verses are put together in the holy book, Kuljam Swaroop, which the community now worships together with his grave. Though his own identity is as fiercely contested as that of his followers today, yet it seems that he was a Hindu from Gujarat, Meher Raj, who was initiated by a Sufi, and who went on to preach the oneness of all religions. Of special interest to this reviewer is the connection (not made in the book) between the Pranamis and Gandhi: Gandhi’s mother belonged to the Pranami sect1 . While traditionally the Pranamis kept their faith a secret, fearing reprisal from both Hindus and Muslims, yet in the early decades of the twentieth century the sect began to change rapidly from within; there was an urgency to identify itself with Vaishnavism.

It is difficult to do justice to the several shrines and modes of worship evoked, the hubbub of noise, colour, filth that generally marks the Hindu centers, the relative peace and cleanliness of the dargahs, the many histories that Sikand presents, or the common people who come alive in the book in all their vulnerability or self-preserving cunning. The refreshing lack of romanticization is bracing; as is the absolute refusal either to make cerebral or sentimentalize any aspect of his narrative. Sikand has a rare gift: he is eminently honest and is able see himself and the world around him with amused sympathy. The narration is intelligent; there is no self-conscious (or self-indulgent) reflexivity of the ‘privileged’ narrator condescending to the marginalized; the result is that the reader is engaged in an exploratory process of discovery and respect that is punctuated at several points of the narration by a sharp regret.

This regret is at its deepest in the very last chapter of the book when the reader visits with Sikand, Chrar-e-Sharif, the resting place of Hazrat Nuruddin Nurani, better known as Nund Rishi, the patron saint of Kashmir. The Chrar is Kashmir’s most hallowed pilgrimage center for Muslims and Hindus alike, and Nund Rishi who, together with Lal Dhed, expanded the understanding and practice of spirituality in Kashmir, is as beloved of pandits, non-Brahmins, as of Muslims. The Chrar, it must be remembered, went up in flames along with other houses in the town in April 1995, when Islamist militants and the Indian Army fought a grim battle that lasted many days. The burnt and roofless remains of the dargah , once a symbol of the shared spiritual culture of Islam and Hinduism, and the finest specimen of Kashmiri architecture, speak for the horror that has been unleashed on the valley, and indeed on much of the subcontinent, in the name of religion.

For a book that claims to explore traditions of shared faith in India, the east and the north-east are conspicuous by their absence. This, it must be admitted, is a serious lacuna considering the many syncretic traditions of Awadh, Bengal, Assam and other parts of the north east. A few photographs, a glossary and an index would have contributed to the overall quality of the book.

Rohini Mokashi-Punekar teaches in the Department of Humanities and Social Sciences, Indian Institute of Technology, Guwahati.